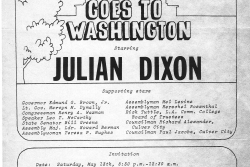 Since 1976, every U.S. president has designated February as Black History Month. This was an outgrowth of Negro History Week. Culver City, like other American cities, celebrates the contributions of many fine black citizens.

While working on a display this weekend in the Culver City Historical Society’s Archives and Resource Center this weekend, I was reminded of Julian Dixon’s contributions to our history.

Culver City has been very lucky to enjoy the support of many of our elected officials, local and beyond. But only a few impact our lives by virtue of their being.

One, held in high esteem, was the Honorable Julian Dixon. Born August 8, 1934 in Washington D.C., he attended school in Los Angeles. After earning his law degree locally, he served first as our Assemblymember, followed by his continuous election to the U.S. House of Representatives, until he died in 2000.

A recognizable local figure, Julian Dixon even attended Culver City Community Coordinating Council meetings and he was often a guest speaker for many local organizations.

One might have noticed him in sweats on Sunday, shopping locally for groceries. He patronized Geo. Petrelli’s for a good steak. Julian enjoyed visiting with the locals.

Julian Dixon was not a flashy politician. He was a legislator who cared about his constituents as people. He fought for us, the young, the seasoned and those in between.

He was concerned about children and education. When Culver High received the Distinguished School Award in Washington D.C. in the early 90s, he supported our CCUSD delegation in person.

Julian Dixon was effective. He served us well, both in Sacramento and in Washington D.C. Our Culver City Library was renamed in his honor and there is a room in our Senior Center as well.

You can see reminders of his life as our representative in a Black History Month display at the Culver City Historical Society Archives and Resource Center.

Although Julian Dixon was a wonderful role model, there are many others to think about this month, too. Musician Lionel Hampton got his start at Sebastian’s Cotton Club in Culver City, with help from another local musician, Louis Armstrong.

On return to the city, many note the landmark Al Jolson Memorial at Hillside Memorial Park, designed by noted black architect, Paul Williams. Other notables, like Herb Wesson also add to our black history. His boys, doing the “Super Bowl Shuffle” at the Lin Howe talent show will always be my favorite memory of the Wessons, though.

There is no charge to drop by the CC Historical Society Archives. Entry is from the back of the Veterans Memorial Building. Hours are first and third Saturdays, from 1-3 p.m. and by appointment.