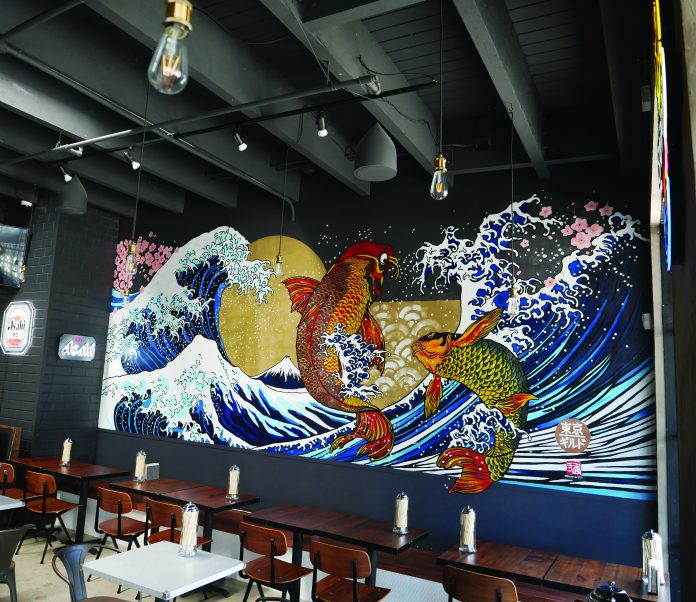 While some restaurants with a foreign theme seemingly transport you to another world, Tokyo Guild tries to keep you a bit more grounded. You get to feel that Japanese theme the moment you step in the doors with a vibrant wall painting based on the iconic “The Great Wave off Kanagawa” and the neon signs of Japanese beers, but you are also reminded you are still in Los Angeles with 90’s hip hop music coming from the speakers, and a gem of an Orange Bang machine in the back of the restaurant.

You can feel this “best of both worlds” mentality in the food as well. Tokyo Guild opened last Saturday as a Japanese bar at 9810 Washington Blvd, Culver City, but the Los Angeles roots still run deep within its walls. The theme of the food does have mainly Japanese roots, mainly focusing on Japanese style sandwiches and ramen. You have your Japanese classics such as the egg sandwich—more commonly known as “egg sando”— and the fried chicken cutlet sandwich, but you also have more interesting traditionally American looks, like brussels sprouts with walnuts and a burger with a patty encased in fried breadcrumbs.

One of the important things in this combination is not trying to do too much, and Tokyo Guild proved that they can bring out unique flavors while maintaining the balance and integrity of the original Japanese dishes. The egg sando—a traditional staple in Japanese culture and a very simple dish—was simply that at Tokyo Guild. Everything about the egg sando tasted exactly as you would imagine it would, nothing more and nothing less.

That’s not to say that the food isn’t creative, as proven by some of the other sandwiches. The chicken cutlet sandwich was topped with cabbage and karashi mustard. The crunch from the cabbage provides an element that allows the chicken’s fried crust to remain softer, while the mustard gives the sandwich a subtly sour kick that puts the entire dish together.

The dish that epitomizes the feeling of Tokyo Guild is aptly named “Guild Sando”, which was a sandwich with a burger patty covered by bread crumbs, topped with cabbage and kewpie mayo. With these ingredients, you would imagine a very heavy and hearty burger, but the Guild Sando is actually very mild in terms of burgers. The cabbage once again provides a crunch so that the outer crust on the bread is allowed to remain well cooked and not overly crispy, and the kewpie mayo not only provides a subtle flavor but also really brings out the flavor of the burger patty itself.

In addition to sandwiches, ramen takes center stage at Tokyo Guild. If you are someone looking for a lighter meal to pair with a drink, then the Tan Tan ramen with its sesame chicken broth and subtle spiciness is the way to go.

On the other hand, for those looking for a full, thick broth turned red from the spiciness, then the spicy Tonkatsu Ramen is down your alley. While the broth has a spiciness that will make you sweat, you can still distinguish the thick pork flavor of the broth as a result of the bone boiling process that goes into tonkatsu ramen.

Finally, what’s a bar without drinks? Tokyo Guild has a variety of cocktails, each calling on a mixture of American and Japanese flavors. On the sweet side, you have the Automator — a cocktail with a Navy Strength vodka base, yuzu, tea, and lemon juice, with accompanying sugar coat on the side of the glass. For those who are into the stronger stuff, you have drinks like the O.D.B. — a mixture of Rittenhouse rye, Suntory whiskey, and Montenegro with angostura bitters.

Japanese style bars, or izakayas as they are more commonly referred, are another aspect of Japanese culture that America is beginning to dabble in, and more and more are just starting to come around to not only Culver City but LA and America as a whole. For those who are curious and trying an izakaya for the first time, places like Tokyo Guild will certainly leave a great impression.