Mike Birbiglia shares tales of unexpected joy and terror after the arrival of THE NEW ONE in his life.

Mike Birbiglia is a comedian, storyteller, director and actor who has performed in front of audiences worldwide from the Sydney Opera House to Carnegie Hall, as well as being an author and filmmaker who wrote, directed and starred in the films “Sleepwalk with Me” and “Don’t Think Twice.” His book “Sleepwalk with Me and Other Painfully True Stories” was a New York Times bestseller and a finalist for the Thurber Prize for American Humor. In his new one-man comedy, THE NEW ONE, Birbiglia begins by sharing stories of what his sleepwalking cost him in his life, such as needing to be zipped into a sleep sack from which he could not escape and then locked in his own room so as not to hurt himself or anyone else sleeping in the same place.

And if those tales are not funny enough, he then delves back to tell a new story in a new way with the same heart and humor his fans have come to expect while sharing observations about becoming a parent and the ways his life changed after the birth of his daughter, Una.  Yes, she is ‘The New One’ whose arrival his wife assured him would never change anything in their lives. Of course, everyone who has had a baby knows nothing could be further from the truth.  Everything changes!

Beginning on a basically empty stage with a large center rug and one wooden stool, Birbiglia begins by talking about the first thing he bought as an adult for his first apartment – a new couch – and how much he loved sleeping on it. As he gushes about how he loved being wrapped in its warmth, that little stool literally becomes his beloved, overstuffed companion where he reads, writes, eats and sleeps until walking through a plate glass window alerted him to his sleepwalking habit, ending his ability to sleep in the open ever again. But the couch remained in his living room and became the place where he cuddled and did several other things with his girlfriend who soon became his wife. And it stayed in his life until their pet cat decided to take revenge upon said couch, leaving it unfit to remain indoors any longer.

Now back to ‘The New One’ and how her entrance onto the scene changed everything.  Well, perhaps not for Birbiglia as much as his wife since he still had to sleep locked up in his own bed bag and room. And, of course, he traveled quite often taking his shows on the road while his wife remained at home to care for Una. And in one uproarious moment, be prepared to watch as more baby items than you could possibly imagine drop onto to the stage from above, a physical representation of the inundation Birbiglia experienced as the baby took over his quiet, at-home life. His comical impressions of many of those items left the audience howling with laughter, no doubt bringing up memories from their own lives when ‘The New One’ arrived and took over every inch of the place and brought a relentless invasion of unexpected joy and terror, all shared in a remarkably fast-paced 90 minutes!

Following its Drama Desk Award-winning Broadway debut, ‘The New One’ written and performed by Mike Birbiglia, with additional writing by Jennifer Hope Stein, is directed by Seth Barrish with set design by Beowulf Boritt, lighting design by Aaron Copp, and sound design by Leon Rothenberg, continues through Nov. 24 at Center Theatre Group’s Ahmanson Theatre. Tickets ranging from $35-$145 are available online at CenterTheatreGroup.org, by calling Audience Services at 213-972-4400 or in person at the Center Theatre Group Box Office at the Ahmanson Theatre at The Music Center, located at 135 N. Grand Ave., Los Angeles. 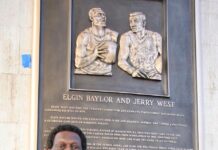