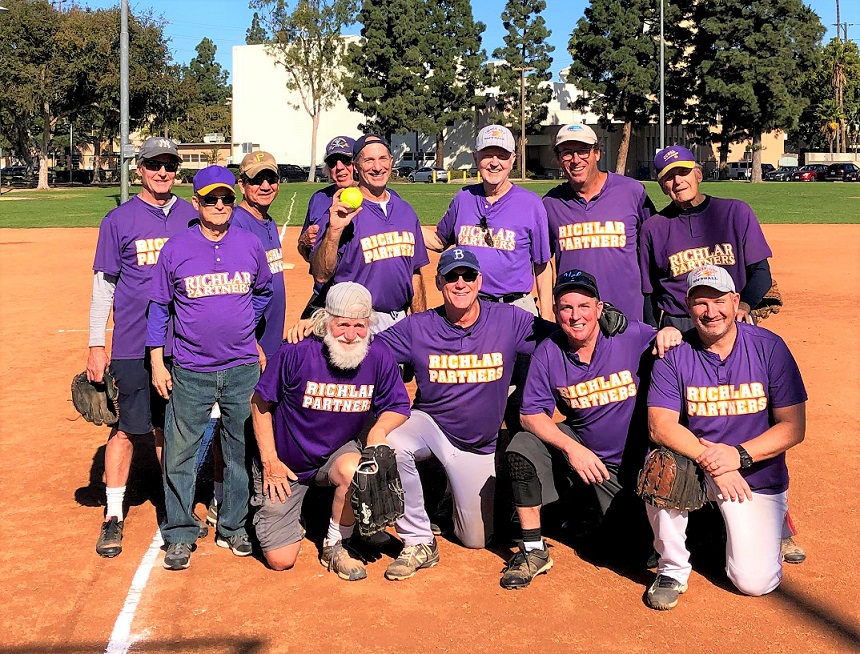 Managers on the seven teams of the Culver City Senior Softball Association will draft players for the new season that will begin Feb. 2, with games played Sunday mornings at Veterans Park.

Men, ages 55 and older, and women, 45 and up, participate in the parity league sponsored by the Culver City Dept. of Parks, Recreation and Community Services, providing opportunities for its players to play a game they love and make new friends.

“We are always looking for new women and men to join our league. Our best years may be in the rear-view mirror, but we play as if the clock has been turned back.  We tease each other and have a great time,” said league commissioner Rich Jebejian, 80.

Seniors of all abilities may swing a bat or put on a glove during any Saturday and Sunday morning practice or game, 9 a.m., at Veterans Park, to meet players and managers to become full or part-time players in the weekly games.

The Purple team rebounded from a trouncing by the White Team managed by Robert Kurtz in the winner’s bracket final of the double-elimination tournament to play a near-flawless game in the championship against the Black team.

“The score was a lot closer than it looked.  Fortunately for us, we picked the championship to play our best game of the season. I don’t think we made one error. In senior ball, that guarantees the win. It was just our day,” said first baseman Walt Shubin of the Purple team.

“We hit so many line drives right at them.  They made some great catches

and played wonderful defense.  So, our door did not open to explode for lots of runs each inning,” said Black team manager Gary Butcher.

The rising from the ashes metaphor of the title-winning Purple team, managed by Gordy Gershman, parallels the inspiring narratives involving the 100 female and male players in their twilight years.

Former Los Angeles Angel major league baseball player Butcher battled numerous nagging injuries all season with his knees betrayed him during the playoffs, but still was able to guide his squad to its third consecutive championship game with different players each year.

Former Los Angeles Dodger farmhand Fred Brown, who uses a walker to amble to the field, helps prepare the fields for the Sunday games and his floating singles into left field remind old-timers of his glory days.

Battling cancer, Don Hensley, a former Police Athlete of the Year and all-star softball and basketball player, went four-for-four in a playoff game.

“Don is past nine lives. He is amazing. Playing inspires him, and he inspires us,” said his manager Kirsch.

“The competitiveness and comradeship with fellow teammates are why I play in Culver City.  After a while, you get to know every player.  It’s a lot of fun,” said Hensley.

Experienced second baseman Donna Sloan fields and hits masterfully as her adult daughter, who uses a wheelchair, cheers her team on from the sidelines.

Ramon Apodaca, diagnosed with Multiple Sclerosis, shows his defensive range at second base and keen skills at the plate as he sprays surgical base hits.

“Eligible” 89-year old manager Gershman finds ways to lead his teams from the second division to champions. He bats last in the lineup, looking to draw walks to set up his lead-off hitters.

And then there’s fourth term commissioner Jebejian, 80, who says misbehaving players will be named “League Commissioner” as a penalty.