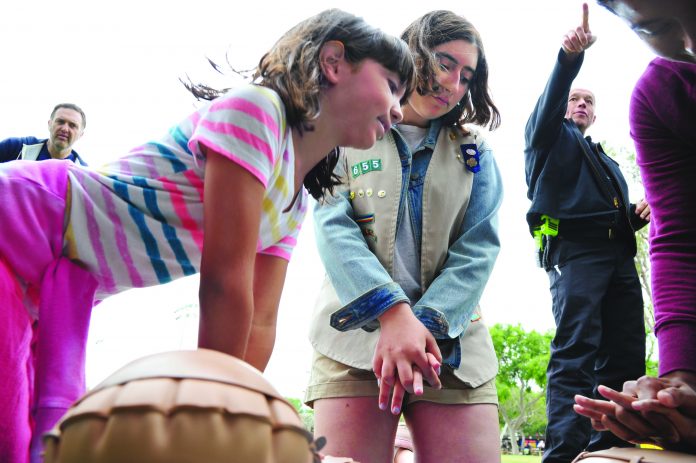 Natalie Glassman hopes to pursue a career in medicine. So, it was only natural that as a member of Girl Scout Troop 655, she would choose a health-related project for the coveted Gold Award.

Glassman, 17, coordinated a Hands-Only CPR training day on April 27 at Veterans Park, in conjunction with the Culver City Fire Department and EMS Capt. Daniel Dobbs and Firefighter Daniel Nembhard. From 9 a.m. to 2 p.m., the public was invited to get a 15-minute CPR lesson that required “only hands” training to help resuscitate a victim.

Setting up two stations in the park, Dobbs and Nembhard manned each area and provided supplies for the training, including practice dummies.

Natalie and fellow Scouts also assisted the firefighters in teaching basic life-saving skills. Anybody age 12 and older could take part in the training.

Her goal was to train 200 people at the park in life-saving techniques.

“My training day was extremely successful,” Glassman said. “My goal was 200 peopIe, but that was a very large goal. I trained about 140 people. I am very happy with the turnout.”

Dobbs said the short training was not to meant to replace a full certification program, but to introduce people to basic CPR (cardiopulmonary resuscitation).

“This training is to stimulate the heart, get the blood flowing,” Dobbs said. “It does not require mouth-to-mouth resuscitation.”

The force used to push down on a victim’s sternum caused some trainees to ask about potentially breaking a bone, such as a rib.

“Bones heal,” Dobbs said, but death is certain if the heart and lungs stop functioning.

The preparation for the Gold Award-CPR project took several months of planning with CCFD officials, Glassman said. In the Girl Scouts, attaining the Gold Award is the highest pinnacle, and equivalent to the Eagle Scout Award in Boy Scouts. Eighty hours of commitment to the community-based Gold project was a requirement.

Glassman has been a Troop 655 scout for seven years, since the fourth grade, she said. She previously attained her Silver Award by teaming with fellow scouts Sofia Biren and Maia Channel in “organizing a large book drive for Hoover Street Elementary School.” 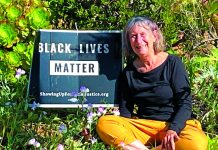 One of Culver City’s first BLM signs has distant roots