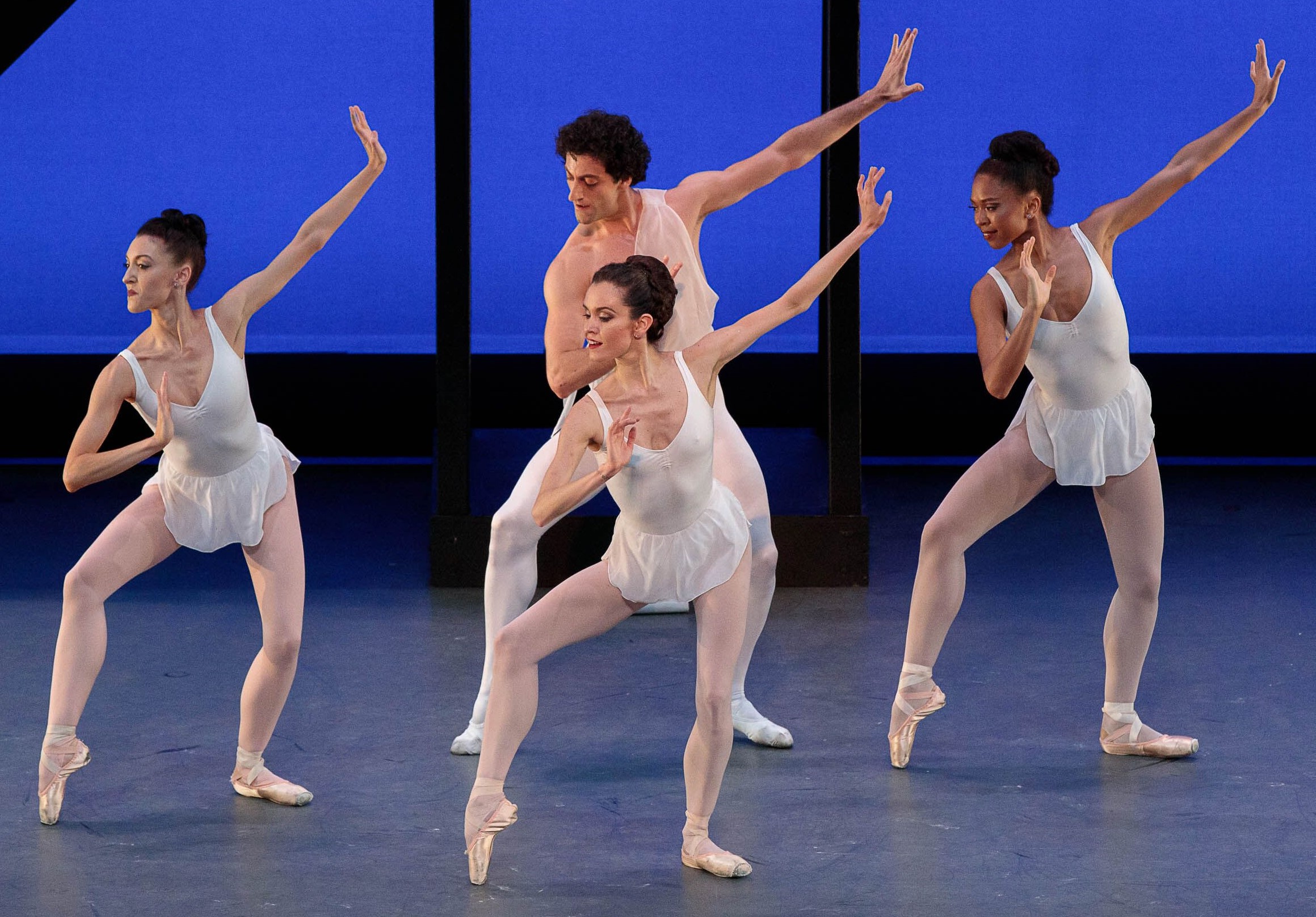 Los Angeles Ballet (LAB), the city’s own and only professional classical ballet company, was founded in 2004 by Artistic Directors Thordal Christensen and Colleen Neary, and Executive Director Julie Whittaker, and is known for its superb stagings of the Balanchine repertory, stylistically meticulous classical ballets, and its commitment to new works. LAB has become recognized as a world-class ballet company, in thirteen seasons, presenting 41 productions encompassing 69 works, including 15 commissioned world premieres.

I have personally been attending their performances for several years, most often at LAB’s home theaters: UCLA’s Royce Hall, Glendale’s Alex Theatre, Redondo Beach Performing Arts Center, and the Dolby Theatre in Hollywood. But last weekend I was lucky enough to be in the audience for their special, three-night Balanchine Black & White ballets performed at The Broad Stage in Santa Monica. The evening was staged by Artistic Director Colleen Neary who shared, “In the intimate setting of The Broad Stage, these contemporary works reveal the purity of Balanchine’s choreographic genius and will allow our audience to experience every nuance and line as he intended.” And since she personally studied with Balanchine when he was “an energetic 70-year-old who could still move with the best of us,” the evening was a thoroughly authentic presentation exactly the way Balanchine envisioned his ballets should be done.

Balanchine Black & White included three different ballets: Agon (Stravinsky), Apollo (Stravinsky), and Concerto Barocco (Bach), three of George Balanchine’s best-loved works which display simple, aesthetic costumes of leotards and leggings in black and white, in contrast to the ornate, classical-style ballets of the era that preceded these works. Balanchine removed the narrative, characterization, costumes, and sets while retaining the rigor of classical ballet technique. And without spectacular costumes, Balanchine’s ‘black and white’ ballets prove that dance requires no embellishment, revealing the purity and beauty of ballet at its best.

Agon is the Greek word for the contest; the five movements of the ballet are named after French court dances. Together, Balanchine and Stravinsky designed the structure of the ballet during the creation of the music. The outline for the score specifies in detail, with exact timings, the basic movements for twelve dancers, clad in simple black and white costumes. What makes Agon so spectacular is the complicated choreography with specific groups of dancers moving differently while all keep time to Stravinsky’s very atonal music, which was first performed on June 17, 1957, in Los Angeles. Balanchine’s ballet set to it was first performed by the New York City Ballet on December 1, 1957, the same year West Side Story and The Music Man opened on Broadway.

Stravinsky, who possessed a strong interest in Greek mythology, conceived of and composed the score of Apollo as a ballet. It was with this work, Balanchine’s second set to the music of Stravinsky, that he achieved international recognition at the age of 24 when Apollo premiered in Paris in 1928 and began his lifelong partnership with the composer. Balanchine regarded Apollo as his artistic coming of age, and while not as atonal as Agon, there are elements of Balanchine’s organized disorder in his choreography. Beginning at the birth of Apollo, with his mother Leto (Leah McCall) attended by handmaidens McKenzie Byrne and Hannah Keene, Apollo is set against a luminous blue background, evoking the Aegean Sea.

The ballet depicts Apollo (beautifully danced by fabulously talented leaper Tigran Sargsyan), the young god of music, who is visited and instructed by three Muses who were also children of Zeus and thus his half-sisters – Calliope, Muse of poetry, whose symbol is a tablet, danced by Laura Chachich; Polyhymnia, Muse of mime, whose symbol is a mask that represents the power of gesture, danced by Jasmine Perry; and Terpsichore, the Muse of dance and song, whose symbol is a lyre, danced by Petra Conti. I especially enjoyed the symmetry of the Muses artistically romantic movements, with their bright white costumes following in the sea breeze, proving exactly why Apollo admired them from the depths of his soul. The exquisite Pas De Deux between Apollo and Terpsichore highlights the dynamic plaStage Page yfulness and moments of solemnity inherent in the entire piece.

The most classical of Balanchine’s ballets during the evening was Concerto Barocco, set to the music of Johann Sebastian Bach. Balanchine said of this work, “If the dance designer sees in the development of classical dancing a counterpart in the development of music and has studied them both, he will derive continual inspiration from great scores.” In the first movement of the concerto, the two ballerinas personify the violins, while a corps of eight women accompany them. In the second movement, a largo, the male dancer joins the leading woman in a pas de deux, danced by Petra Conti, Jasmine Perry, and Magnus Christoffersen. In the concluding allegro section, the entire ensemble expresses the syncopation and rhythmic vitality of Bach’s music.

‘Och & Oy! A Considered Cabaret’ now at The Broad Stage