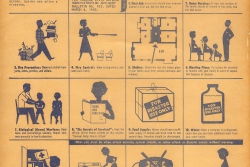 Culver City has actively protected its citizens for several decadesThis piece, a recent donation to the Culver City Historical Society, was posted in a local home in the Veterans Park area until the home was put up for sale recently.  The Federal Civil Defense Administration Advisory bulletin No. 182 is dated March 4, 1955, five years after the Veterans Memorial Building was constructed.

It begins, “FOLLOW THE RULES CONTAINED IN THIS DIAGRAM FOR YOUR PROTECTION.  LEARN NOW WHAT TO DO BEFORE, DURING AND AFTER A DISASTER.”

The advisory tells of the steady blast of three to five minutes, during which there would be “a wailing tone or a series of short blasts of three minutes duration” and locals were advised to take cover.

Today, you can check the city website and learn how to protect your family and about CERT, which works actively to help protect our community along with our city’s police and fire departments, and through preparedness events like the Great California Shake Out Drill Day.  The two components listed on the website offer information on a disaster plan and the “OK SIGN” program.

Things change…..but they also stay the same.  We live in a community that that thrives on caring and being prepared.

Caption:  This vintage guide, entitled “Your Guide for Survival” was distributed by the city more than 50 years ago. It is part of the Reese Collection housed in the Culver City Historical Society Archives and Resource Center.