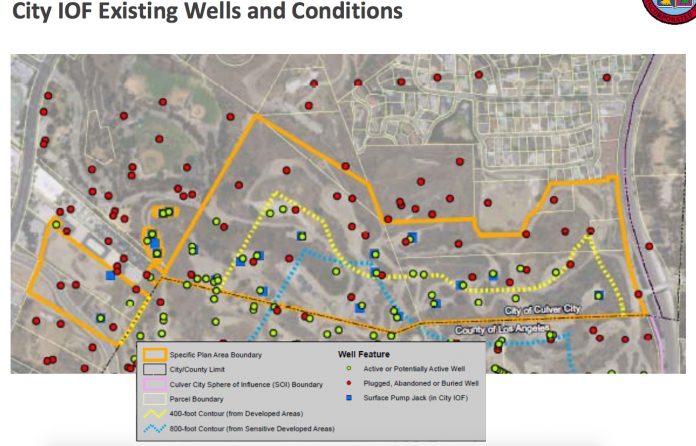 The Oil Drilling Subcommittee of the City Council of Culver City held a meeting to discuss the commencement of the amortization study of the Inglewood Oil Field. The study will be mainly focused on surface wells as opposed to subsurface storage and will analyze both the land use as it pertains to legality of non-conforming land uses, as well as weighing the capital investment against the rate of return for the wells in the field.

A legal non-conforming land use is an establishment on land that was entirely legal within the city codes of its time but may be considered illegal now if they were to try and use the same land for the same thing. The city is conscious of this and will forgive this now illegal use of land because it was legal before, and the Inglewood Oil Field may be an example of this.

The study will only cover the portion of the Inglewood Oil Field around Culver City Park that lies within Culver City’s borders, as well as a small portion adjacent to those fields—deemed as Culver City’s “sphere of influence.” This covers about 80 acres or approximately 10% of the total area of the oilfield.

The goal of this amortization study is to gain more information about the possibility and feasibility of ceasing oil drilling in the portion of the oilfield that lies in Culver City. This study would be one of several different pieces of information that the City Council would consider in making the final decision, which includes the Environmental Impact Report, Draft Specific Plan, current ordinance, and existing well history.

Conducting the study will be the firm “Baker & O’Brien,” who have specialized in the energy industry since its creation in 1993. The City Council unanimously elected to allow “Baker & O’Brien” to conduct the study at the May 28 City Council meeting. The study has an estimated timeline of about 6 months, after which the City Council will hold a public hearing to decide whether or not to begin to take the steps to end oil production on that land.

The study will be broken down into six main steps. The first is data gathering and base case development, which is the initial phase in which the baseline amortization scenario is developed, followed by a theoretical run of that model. They then move to sensitivity analysis, which adds some alternate ‘what-if’ conditions in order to make sure the base case accounts for variables. The full report will then be prepared and presented to the City Council, and a decision on how to move forward will begin from there.

This is a project that has been brewing for several years, with an Environmental Impact Report (EIR) promised for the project as early as August 15, 2011, according to Paul of the Citizens Coalition for a Safe Community. However, it only really got moving forward in April of 2017 when Sentinel Park Resources (SPR) became the new operator of the Inglewood Oil Field and wanted to submit a detailed land-use plan to move forward with.

However, after movement towards a working agreement stalled and the community expressed the desire to move forward, SPR withdrew their request in July of that year. The Specific Plan Project, which outlined the general ideas and objectives of the Inglewood Oil Field Project, and the impact that the completion of those objectives, was revealed to the public at a meeting on February 21, 2018.

On June 20, 2018, things started to take a turn, as the EIR and the Specific Plan Project that had been constructed over several years was put on hold for a new potential step: an amortization study.

At that point, the two current goals of the projects were outlined: facilitate review and recommendation regarding the potential transition of Interim Oil Activity land uses, and incorporate into the General Plan Update process a vision for future land uses based on a potential “end of life” timeframe for the IOF.

About a year later, urgency for the project kicked up once again after an oil leak occurred at the Inglewood Oil Field that spilled out onto Leash Lane near the Boneyard Dog Park at

Culver City Park. The oil traveled downhill but was contained just short of the Duquesne and Jefferson intersection at the base of the park. It is estimated that less than a barrel of oil got into the storm drains, and none of it was able to reach Ballona Creek.

Less than 2 months after this incident, the City Council unanimously voted to move forward with the amortization study and will come to a proper conclusion as to what to do with the Inglewood Oil Field moving forward.