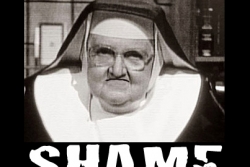 Sometime during the past 20 years the need or ability to feel ashamed of having done something wrong has vanished.

It wasn’t that many years ago when a person did something shameful, they would apologize to those involved and attempt to atone with acts of contrition.

Today, get on the Oprah show, start sobbing and blame a dead parent, thoughtless neighbor or the insensitive kids who bullied you at school. It’s not your fault. In fact nothing is your fault. Pathetic.

The latest in this never-ending line of egotistical phonies is Mr. Tour de France himself, Lance Armstrong. He is sadly a product of our ever-changing culture.

Back in the day, whenever I would say or do something my mom deemed out of line, she would indignantly respond, “Peter, you have a lot of gall.” Unfortunately, there’s a pandemic of gall in this country.

I was influenced by many boyhood idols, some good and some not so good.

Heck, in the ninth grade, I boldly informed my parents that I wanted to be cool and would grow my hair like singer-songwriter Bob Dylan.

Five minutes later I found myself seated in a chair with a sheet draped around me while my mom proceeded to give me a butch haircut.

With her last swipe of the rattling clippers my dad calmly remarked, “Go call your buddy Bob Dylan and tell him to come over and we’ll give him a Pete Whalon haircut.”

My parents had a good laugh at that one. I never brought up Bob Dylan’s hair again.

Most people go about their lives doing the right thing every day. And if they screw up they do not get a second, third or fourth chance (are you listening Lindsay Lohan?).

No Oprah available to whimper in front of for Jill and John Doe. No Dr. Phil to pour your guts out to for hard working, decent nine to fivers. Shame on you.

How in the world did we arrive at this point in time you ask? Who knows, but here we are.

Perhaps all degenerate, abnormal acts are, in fact, someone else’s fault. It sure as heck makes it a lot easier the next time you get pulled over for drunk driving with your neighbors 19-year-old daughter in the car to blame your dear departed father who cruelly made you complete your homework before you went outside to play, or your sixth-grade teacher who maliciously held you after class for shooting spit wads at little Susie Simpson back in 1975.