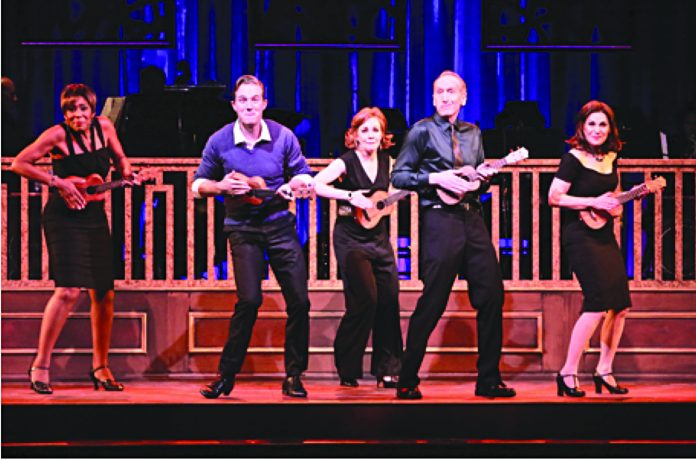 The World Goes Round: The Songs of Kander & Ebb is a stunning song-and-dance revue celebrating some of Broadway’s wittiest, sexiest and most memorable songs that helped launch the careers of musical legends as Liza Minelli, Chita Rivera, and Barbra Streisand. The score is composed of many well-loved show tunes by the multi-Tony Award-winning duo of John Kander and Fred Ebb, whose creations include Cabaret, Chicago, Kiss of the Spider Woman, Funny Lady, and New York, New York.

The beauty of this musical revue is that it can be done in any style chosen by the director. The current Reprise 2.0 production at UCLA’s Freud Playhouse, presented in association with UCLA School of Theater, Film and Television Department of Theater, is directed by Richard Israel with choreography by John Todd and musical direction by Gerald Sternbach. Sternbach’s direction enhances the brilliance of every song thanks to his energetic seven-piece orchestra. Filled with humor, romance, drama and nonstop melody, the ensemble cast of Dawnn Lewis, Valerie Perri, Larry Cedar, Kelley Dorney, and Michael Starr careened through a celebration of life and the fighting spirit that keeps us all going.

There were many amazing standout performances that captured the spirit of the revue and the audience’s appreciation. Among them was the song “Coffee in a Cardboard Cup” during which the ensemble’s comic choreography celebrated our love of Starbuck’s addictive brews. There were also the performances of “All That Jazz and “Class.” Both performances received applauds as well as the always show-stopping “Money” which ended the first act.

The second act started off with a real bang as Kelley sang “Ring Them Bells.” Next, Valerie and Michael entertained with “Arthur in the Afternoon” which delighted many audience members when he was stripped down to his underwear at the end. Afterwards, Larry grabbed sympathy as the always ignored “Mr. Cellophane.” Michael and Kelley then exploded into a classic tap dance celebrating the glory of love in “Marry Me,” “Quiet Thing” and “Shoe Dance.” Valerie’s dynamic belt was showcased during “Kiss of the Spider Woman” as was Dawnn’s in “Maybe This Time.”

With a total of 34 selections, there were times when a lack of emotional connection to the song’s content diminished the overall impact. Then again, in this revue we are not seeing the characters from the original musicals, just singers interpreting the songs without telling the entire musical’s story. So while the production seemed a bit too long with no real connecting story, once the ensemble reached the end with “Cabaret” and “New York, New York,” it was very apparent these two tunes were perhaps the most well-known and best-loved in the show.

Thanks to Stephen Gifford’s scenic design, the revue takes place in a classy nightclub with the on-stage orchestra raised above a center staircase. This positioning allows the cast to escape quickly into the wings as there are many costume changes.