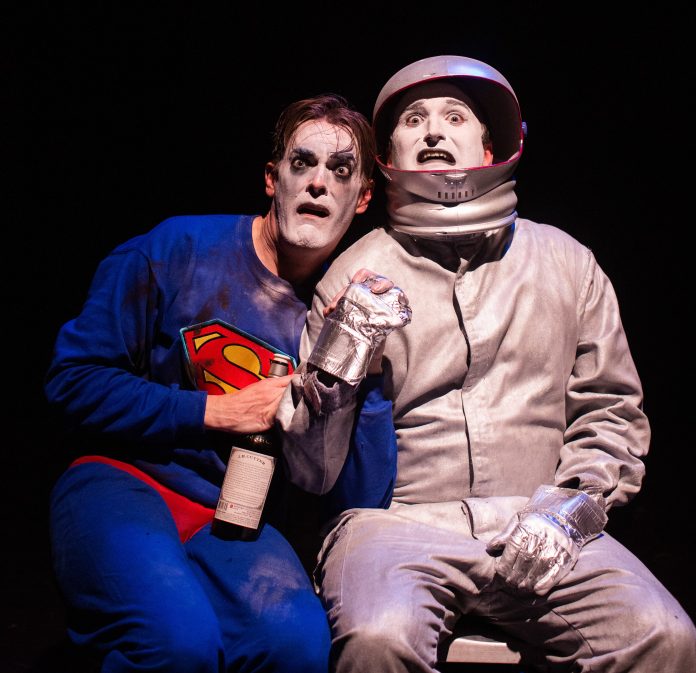 For the past 37 years, well-known actor Tim Robbins has served as Artistic Director for The Actors’ Gang, a theater company formed in 1982 that has over 150 productions and more than 100 awards to its credit. Certainly, most of us can name a favorite film in which he appeared, including “Top Gun,” “Bull Durham,” “Jacob’s Ladder,” “Cadillac Man,” “The Player,” “Bob Roberts,” and my personal favorite, “The Shawshank Redemption.” But when asked about all he has accomplished as an actor, writer, director, producer, and composer, Robbins freely admitted that he feels most accomplished reaching out to the underserved through live theater.

No doubt this is why The Actors’ Gang provides arts education to thousands of Elementary, Middle and High School students working in 12 LAUSD schools and in underserved communities in the L.A. area. Since 2006, The Actors’ Gang’s groundbreaking Prison Project has provided theatrical workshops to incarcerated men and women in 12 California prisons, offering inmates a valuable learning experience in communication before re-entering society. Needless to say, Robbins is a master at giving back to the city in which he was born.

Back in 1986, The Actors’ Gang presented VIOLENCE: THE MISADVENTURES OF SPIKE SPANGLE, FARMER, originally written and directed by Tim Robbins, which offered a no-holds-barred satire of militarism and media manipulation. An updated version written by Robbins and Adam Simon, directed by Bob Turton, has re-invaded The Actors’ Gang through June 22 in Culver City. The political and social satire tells the story of Spike Spangle, a down-on-his-luck farmer who gets sucked into a whirlwind of celebrity and patriotism, fueled by his need for more money. During his journey, Spike joins Superman on billionaire Max Enormous’ Celebrity Space Shuttle, and a nefarious plot twist leads to the deification of Spike Spangle as an American hero.

Performed on a basically bare-bones set designed by Margaret (Maggie) Cleary on which a large, rectangular table functions as the main set piece in almost every scene, the message is delivered not only by the talented and dedicated actors, but through Bosco Flanagan’s attention-focusing lighting design, Cihan Sahin’s projection design which fills every inch of the space with both real and imaginary worlds, with musical direction by David Robbins which satires popular tunes such as ”When You Wish Upon a Star” and ”Rock Me Amadeus” among others, and cleverly outrageous costumes designed by Mela Green. There is no doubt who the two real people are from the rest, dressed as grossly sinister white-faced mimes who represent corporate manipulators attempting to control society through the media and politics. No doubt fans of Theater of the Absurd will be some of the biggest fans of this multimedia production, whose satire and insanity is still frightening close to our current everyday truth.

Among the actors of note are Tom Szymanski as Spike with Andrea Monte Warren as his pregnant wife Flora, who we meet as they drift off to dreamland in bed until their TV clicks off and starts filling the stage with smoke. His basic desire to attain enough money to save the farm and buy a new one begins Spike’s descent into a media celebrity and patriotic stardom, but at what sacrifice to his real happy place? Among those guiding him down easy streets are a billionaire and self-proclaimed ruler of the world Max Enormous (Will Thomas McFadden who brilliantly chews the scenery to evil perfection), and director Bob Turton as Superman who convinces Spike to accompany him aboard Max Enormous’ Celebrity Space Shuttle to journey into the world of tomorrow.

Patriotism is reflected during several meetings of the corporate Chiefs (Chris Bisbano, Stephanie Lee, Sean Paul, Zivko Petkovic, Stephanie Pinnock and Tess Vidal, all of whom wear half-face masks and comically use their tongues to accentuate each satirical comment), led in prayers by the Reverend (Joshua R. Lamont, whose rubber-faced expressions were classically hilarious), with all taking on ensemble roles with Margaret (Maggie) Cleary, Jeremie Loncka and Cady Zuckerman, who often act as cheerleaders for the cause, especially during John Philip Sousa’s ever-popular ‘Stars and Stripes Forever’ parade march.

This comical yet critical satire of the ways in which media moguls and politicians can influence social change when the gullible public is pulled into their financially-motivated schemes certainly reflects today’s sad state of affairs. One can only hope visionaries such as Robbins can keep encouraging us to #SpeakUp and #Vote leaders into places of power who truly reflect more than just their own self-importance and greed.

Tickets for “Violence: The Misadventures of Spike Spangle, Farmer” are $34.99. Seniors can get in for $30, while under 30 and full-time student tickets cost $25 with Thursday evenings “Pay What You Can” performances. Tickets are available online at www.TheActorsGang.com or by phone at 310-838-4264. Performances continue through June 22, 2019, on Thursdays, Fridays, Saturdays at 8pm, and Sunday matinees on May 26, June 2 and 9 at 2 pm, at The Actors’ Gang, located at The Ivy Substation at 9070 Venice Blvd., Culver City. Run time is 2 hours with one 15-minute intermission.