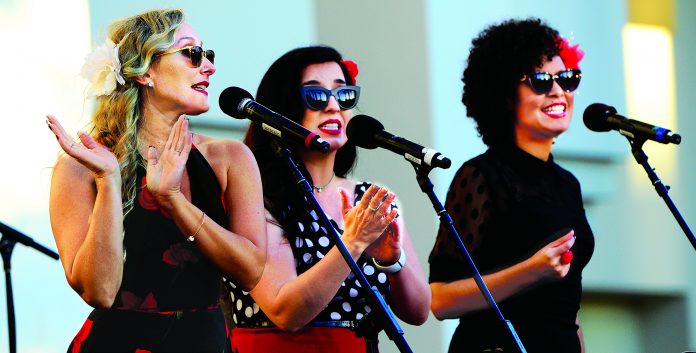 The trio of Blues Review singers at last week’s concert, who back George Kahn, are from left, Courtney Lemmon, Gina Saputo, and newcomer, Natalie Wachen. They performed a variety of songs, from the Andrews Sisters’ “Beat Me Daddy Eight To The Bar” to the R&B sounds of “I’d Rather Go Blind.” Lemmon, a Santa Monica native, was introduced to George Kahn while she attended Santa Monica College. Saputo is a vocalist, entertainer, and arranger out of Eugene, Ore. Her musical training dates back to age 8 when she sang with the Oregon Children’s Choir. Wachen, a local singe rand actress, filled in for regular, Crystal Starr Knighton.