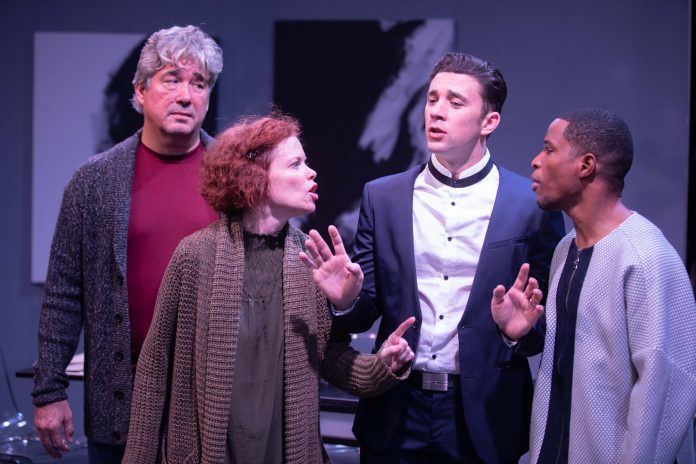 Rogue Machine is presenting the world premiere of DISPOSABLE NECESSITIES, written by Neil McGowan and directed by Guillermo Cienfuegos, at the Electric Lodge in Venice through Feb. 3. The play’s title refers to the physical body we all live with, a cage of meat and bones that signals the end of life as we know it when it breaks down and stops functioning. This new comedic fantasy examines what life might be like in Maryland in the year 2095 when those wealthy enough have the ability to live forever exactly as they choose to be, creating a future where our physical bodies have become disposable, something to be tossed aside and replaced with another model which is better functioning. But what does that mean to our personal relationships when anyone can completely change their physical appearance on a whim?

You see, Life Forever Industries now has the ability to download the digitized soul of a person into another host body, or ‘Module,’ while keeping all your memories and personality perfectly intact. Of course, only those rich enough can obtain the life-altering procedure offering the ability to totally transform yourself as often as you can afford to do so. But what happens when your spouse or child decides to suddenly switch their gender, age, or even race? Does it follow that many of the other concepts we view as necessities — family, love, truth, comfort — may also, one day, become disposable in a world where change seems to be the only constant?

No doubt most of us have thought about what it would be like to inhabit a body of the opposite sex. But in a time when that option is commonplace, how do you deal with loving a person who so completely changes overnight but is still be the same on the inside, while so different on the outside? Can the marriage between a man and woman survive when one partner decides to switch genders overnight? What happens when your son comes home as a member of a different race? How about a streetwise older man changing into a young, vibrant and attractive woman? Or how does a father deal with his daughter being willing to die from cancer rather than be downloaded into another body?  What would you do to try and convince her to stay alive?

Such are the situations faced by the Totten family in “Disposable Necessities,” centering on patriarch Daniel (stalwart Darrett Sanders) and his wife Alice who recently changed her age and gender to become Al, expertly portrayed by Billy Flynn (perhaps best known as Chad Dimera on “Days of our Lives”) who incorporates just the right amount of feminine wiles to add believability to his gender transformation. Adding to the dilemma of learning to be in a same-sex marriage neither of them ever wanted, Daniel’s career as a writer is failing while Al’s is thriving in the business world, now launching him into being the breadwinner of the family for the first time. You see, the two have been through changes before, but never a gender-based one. So how will these two, married for over 50 years, survive such a turnabout this time around?

This is especially true when Daniel’s lifelong friend Phillip Fain tuns up as a totally hot and very well- built young woman, brilliantly portrayed by Claire Blackwelder as a rough-and-tumble man whose lack of any social graces, especially the way “she” now sits spread-eagled in a dress or obsesses over her always-available curves, generated tons of laughter. Kudos to costumer Christine Cover Ferro for designing her feminine apparel to allow for such positioning without continually flashing the audience. But when both Daniel and Al take a sexual interest in Phillip’s new feminine self, how can that possibly work out for the three of them?

Adding into the parents tumultuous dilemma are their two children: their son Chadwick (Jefferson Reid) who shows up one day as an urban African American male, and their daughter Dee (Ann Noble, whose ability to channel her emotions through facial expressions is always a wonder to behold), who has always believed in living your one life, but is now on the verge of succumbing to pancreatic cancer. Will her parents step in and attempt to change her mind, offering to pay for her to transform so she can stay alive with them for as long as possible?

Director Cienfuegos allows McGowan’s well-written humor to keep us laughing at the absurdity of the situation as well as ourselves, contemplating our own reasons to want to live forever while wondering what such changes would mean to the rest of the world. “Disposable Necessities” performances continue on Saturday, Jan. 4 at 8 p.m., Sunday, Jan. 5 at 7 p.m., Monday, Jan. 6 at 8 p.m., then on Saturdays at 5 p.m., Sundays at 7 p.m., and Mondays at 8 p.m. through February 3 (dark Monday, Jan. 13) at Rogue Machine, in Electric Lodge, 1416 Electric Ave., Venice. Tickets are $40 (students $25). Special $20 minimum on Monday, Jan. 20 at the door only, opens 1 hour before the performance. Reservations by calling 855-585-5185 or online at www.roguemachinetheatre.com. Run time is approximately 1 hour 50 minutes (includes 1 intermission). Free onsite parking.