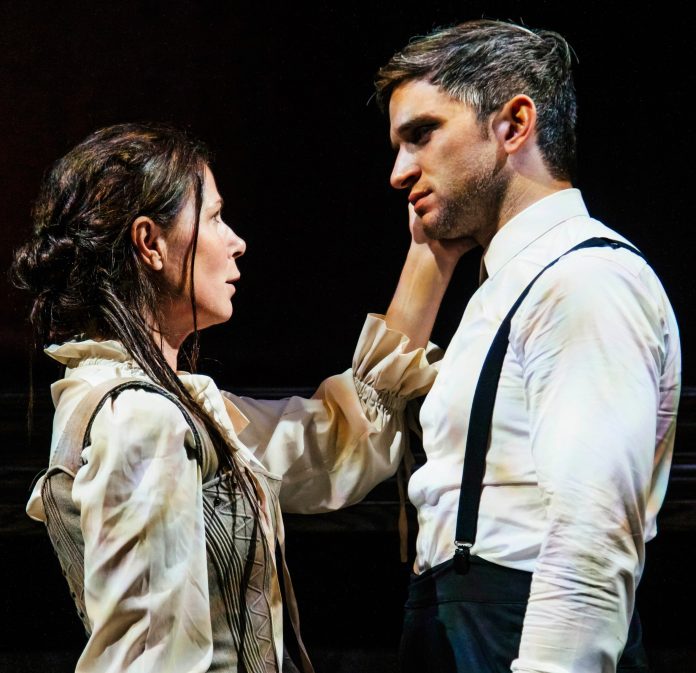 The Geffen Playhouse is presenting the West Coast premiere of WITCH, a fiendishly funny new morality play written by Jen Silverman, inspired by The Witch of Edmonton by Rowley, Dekker, and Ford. Directed by Marti Lyons with choreography by Jessica Lee Keller and fight choreography by Steve Rankin, taking place in a time identified as “Then-ish but equally of our moment,” we are taken into the lives of five people living in the quiet village of Edmonton, four of whom live in a castle with one an outcast living alone in the woods after being labeled a “witch.”

Staged on a brilliantly creative two-setting, split-level scenic design by Dane Laffrey which includes a scene-dividing projected face with the most extraordinary, ever-changing eyes, this inventive retelling of a sharp, subversive fable debates how much our souls are worth when hope is hard to come by, beginning when a charming Devil (Evan Jonigkeit, a black-clad, roguishly perfect scene-stealer) arrives in the quiet village of Edmonton to bargain for the souls of its residents in exchange for their darkest wishes. But which of the five inhabitants will agree to sell their soul to attain whatever it is they think will make them happiest?

Elizabeth (Maura Tierney, who could use an infusion of emotional variety to enhance her character portrayal) should be the easiest to target, having been labeled a “witch” and cast out by the town, but her soul is not so readily bought, having learned her lesson about trusting those who cannot be trusted. Her independent spirit winds up attracting the attention of Scratch, as she calls the Devil, especially since he knows what she craves the most and longs to fulfill it for her. But then, even the Devil can be distracted by unrequited love, it seems.

More susceptible to the Devil’s dealings are Cuddy Banks (Will Von Vogt, whose expressive dance routine after attaining his goal reminds us how fickle fate can be); Sir Arthur Banks (Brian George, all blustery but lacking the simplest of table manners) who fears his gay son Cuddy will never father a family heir; handsome Frank Thorney (leather-clad Ruy Iskandar) whose bravado and machismo appeal to Sir Arthur to name the young man as his heir; and the Banks’ flustered maid Winnifred (Vella Lovell) who is secretly married to Frank and carrying his child.

Certainly, in their own minds, all of these characters would love to change their lives for the better, often at the expense of another. But who will make a deal and suffer the consequences of losing their soul?  One noteworthy example occurs the moment Frank, in order to accept Sir Arthur’s offer to name him as his heir and marry him off to a high-class friend’s daughter, denies being married to Winnifred or that her child is his, which caused a loud gasp of disbelief from many women in the audience – and then much laughter at the sheer volume of their emotional response.

Lighting and sound design by Keith Parham and Cricket S. Myers is especially noteworthy during the scene in which Elizabeth and Scratch sit by candlelight during a rainstorm with drops of water falling into an onstage bucket as well as seemingly on the walls surrounding the audience. And Scratch’s last monologue is delivered very effectively in a downstage spotlight, focusing our attention on his observation that it’s so hard to have hope when it seems there is no new world to be had – so just take what you can even though you will always want more – while the Devil moves on forever. Let’s just hope many of us are able, when the time is at hand, to just say “no” to him and really mean it.

WITCH performances continue through Sunday, September 29, 2019 (dark Mondays) in the Audrey Skirball Kenis Theater at Geffen Playhouse, 10886 Le Conte Avenue, Los Angeles, CA 90024. Tickets currently priced at $30 – $120, available in person at the Geffen Playhouse box office, by phone at 310.208.5454 or online at www.geffenplayhouse.org. Rush tickets for each day’s performance are made available to the general public 30 minutes before showtime at the box office. $35 General / $10 Student 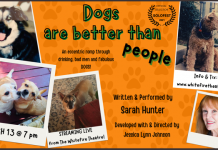 Playwright Sarah Hunter on why ‘Dogs are Better than People’ 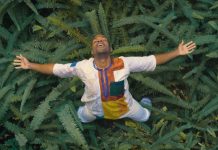