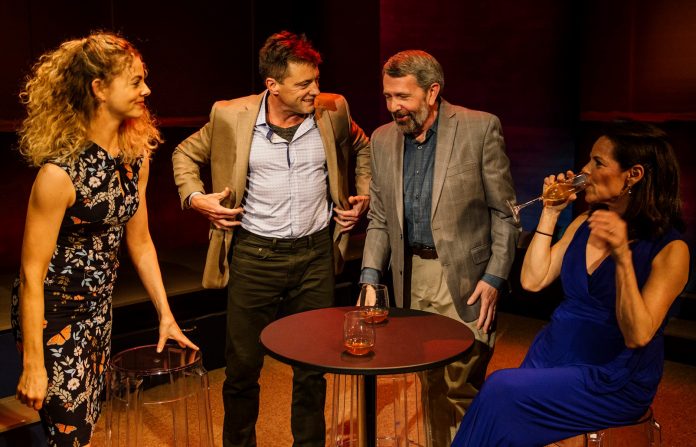 Modern relationships face challenges never imaged by previous generations prior to the invention of the internet where so many choices are offered free of charge to those willing to pursue them. What has stayed the same is the need for faith and hope in order for any relationship to survive and not sink below the red line into separation when one, or both, step across it and end the love and trust which lived there before. In the world premiere of THE THING WE DO by former Arizona Attorney General-turned-playwright Grant Woods (the first chief of staff to the late Senator John McCain who delivered the first eulogy at the Senator’s memorial services), director Elina de Santos transforms his true-to-life exploration of two couples in locations around Santa Monica and Malibu in 2013, taking us along their journeys to find fulfillment, maintain love which is fading, or just in the search for mind-blowing sex. But what happens when the relationship red line is crossed?

“The play has a light, comic, sexy feel at the beginning, which draws you in,” says de Santos. “But then, because of the things people do, it gets darker and more real.”  Narrated by Bill (Blake Boyd, so handsome it’s easy to see how anyone could fall for him), the play begins as he attempts to explain how the road to his downfall began, not accepting any responsibility by claiming “it was all her fault.” Sound familiar? How many people do you know who always manage to blame others for what they do?

You see, after a chance meeting in a bar and a few great pick-up lines delivered his way, Bill falls for playful and flirty Sara (fearless Marlene Galan) and takes her home for what he figures is just a hot one-night stand. But soon he can’t help but want more, given how lackluster his marriage has become to Alice (Liesel Kopp), a yoga instructor struggling with empty nest syndrome and seeking the path she should follow for the rest of her life. Should it be with Bill or on her own, wondering how can she justify the logical mind with artistic passion?

Of course, it turns out Sara is married, but her rather conservative husband Ted (Stephen Rockwell), is a middle-aged, graying real estate agent who attempts to sell a rundown Malibu home by claiming “laminate is really in.” Naturally, Sara has realized there is a lot more fun and sex to be had elsewhere, especially since it seems to be her main focus in life, as she has always been a player and never had children. So, to alleviate their guilt and attempt to get their relationship out of the shadows, Bill and Sara hatch a plan to introduce their spouses to each other on a double date, ostensibly about the Malibu house for sale, hoping if their spouses fall for each other and begin an affair, all will be right in the world for them.

THE THINGS WE DO, playwright Woods’ second play, realistically presents two couples from differing mindsets as they move from living day-to-day to thinking about their long-range plans and whether or not there really is anything better out there than what has become safe and familiar. True to life, there is more than one answer by the end and I guarantee it will speak to each and every one of us on the same mid-life journey with them. For once trust is broken, how do you get it back? According to playwright Woods, it’s all about faith and hope that the love you feel for your partner can overcome anything, even if the red line is crossed from which there is no going back.

Kudos to the creative team including set designer Stephanie Kerley Schwartz for her multi-level set which the cast easily transforms into the various scenes thanks to director de Santos’ great skill with movement, lighting designer Brian Gale for his exquisite rainbow, mood-enhancing hues, and costume designer Kate Bergh for creating perfect ensembles which reflect the nature of each character to a tee.

THE THINGS WE DO continues on Fridays and Saturdays at 8 p.m. and Sundays at 2 p.m. through May 12 at The Odyssey Theatre, located at 2055 S. Sepulveda Blvd., West Los Angeles, 90025. All reserved seat tickets are $35 with discounts available for seniors, students, and members of Actors Equity, SAG and AFTRA. For reservations and information, call (310) 477-2055 x2 or go to www.OdysseyTheatre.com