Yazmine Reza’s 2009 Tony Award-winning play GOD OF CARNAGE centers on two sets of parents, unknown to each other until their 11-year-old sons, Benjamin and Henry, get involved in an argument in a public park because Benjamin refuses to let Henry join his ‘gang.’

In their altercation following the snub, Henry knocked out two of Benjamin’s teeth with a stick, details we learn in the opening scene taking place that night as the parents of both boys meet to discuss the matter. However, as the evening goes on, the “adults” become increasingly childish, resulting in the evening dissolving into chaos.

Henry’s father, Alan (Matt Landig) is a lawyer who is almost never off his cell phone, much to the chagrin of his wife Annette (Branda Lock), a wealth management executive whose only client seems to be her husband.  The two are very well dressed and from all appearances, are much wealthier and refined than Benjamin’s parents, in whose home the four meet. Benjamin’s father Michael (Don Schlossman, the king of rubber-faced expressions) is a self-made, household products wholesaler whose unwell mother seems to call way too much at the most inappropriate moments, causing him more frustration as the evening’s antics unfold.

Michael’s wife Veronica (Samantha Barrios) is writing a book about Darfur, and proudly displays her research books on the coffee table around which the four are meeting to discuss how to handle the situation between their sons.

As the evening goes on, the “civilized” meeting degenerates into the four getting into irrational arguments, not only about how to handle the situation with their sons for a fair resolution, but also Michael’s insensitivity of putting his daughter’s beloved pet hamster out at the curb to get rid of the “dreaded rodent” he fears. Add to their differences clashing parenting styles, which lead to screaming matches, tears, and incredibly funny back-stabbing one-liners.

In perhaps the most shocking moment of the play, Annette vomits onstage all over the coffee table and Veronica’s beloved books on display there. And of course, bitterness grows during the clean-up process, especially after Alan returns from the bathroom and overhears the truth about how their hosts really feel about him and his family. The breakdown of manners between the two sets of parents will lead you to question who the adults really are, especially after the rum comes out and their tongues begin wagging!

Brilliantly written conversations keep the story moving along at a fast pace during the 90-minute show, with Gail Bernardi’s expert constant movement direction keeping the jockeying for power a very interesting dance to watch.  Both couples are perfectly cast with the more high-class Alan and Annette played by Matt Landig and Branda Lock and the more laid-back Michael and Veronica portrayed by Don Schlossman and Samantha Barrios.  These four actors bring their characters to life from moment to moment as their initial personas break down and tempers flare to the point of physical attack.

Thanks to director Bernardi’s attention to detail and the great skill of the actors, who, even when not speaking, brilliantly react to whatever is going on with the others, the resulting stage picture is one of many scenarios of interaction and reaction between the characters.  I could probably see the show half a dozen times and never catch all the telling glances and rubber-faced reactions that add so many instances of laughter throughout the show.

No doubt, audience members were reacting in recognition of bantering and arguing so similar to what goes on with their own spouses, given how universal the battle of sexes truly is in any marriage – funny to the ridiculous.

“God of Carnage” continues at Surf City’s Second Story Theater at 710 Pier Ave., Hermosa Beach, through Sunday, March 4 with performances on Fridays at 8 p.m., Saturdays at 2 p.m. and 8 p.m., and Sundays at 2 p.m.  General admissions tickets are $28 and may be ordered by calling 424-241-8040 or by sending an email to surfcitytheatre@gmail.com. Visit their website at www.surfcitytheatre.com.  And be prepared to laugh at the foibles of the human spirit in us all. 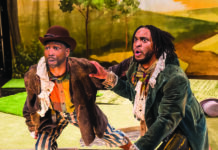 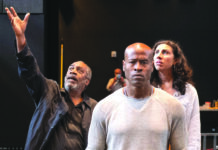