After a record-breaking 24-week run on Broadway where it received two Tony Award nominations and won the New York Drama Critics’ Circle Award for Best American Play, the national tour of WHAT THE CONSTITUTION MEANS TO ME has landed at the Mark Taper Forum through Feb. 28. Written by Heidi Schreck and directed by Oliver Butler, the production stars Maria Dizzia, currently seen on ABC’s popular series Emergence, who dynamically brings Schreck’s overwhelming dedication to understanding as much as possible about the document, its writers, and what it should mean to all Americans.

Her boundary-breaking, thought-provoking play breathes new life into our Constitution and imagines how it will shape future generations of Americans. Even if you think you understand what is contained in the oldest active constitution in the world, I guarantee your eyes will be opened to the ever-changing meaning of passages depending upon those on the Supreme Court who are charged with interpreting what our founding fathers meant when the document was created 230 years ago.

In this hilarious, hopeful, achingly human, timely and galvanizing new play, Playwright Schreck resurrects her teenage self in order to trace the profound relationship between four generations of women and the founding document that shaped their lives. Her insights and thought-provoking questions are perfectly presented with boundless enthusiasm and heartfelt emotions by Maria Dizzia on a one-room set designed by Rachel Hauck, meant to be Schreck’s hometown American Legion Hall where she is going to recreate her first and most famous speech about the Constitution. I encourage everyone to see this insightful examination of what it means to be an American and how each of us is responsible to keep democracy alive in our ever-changing world.

After asking the audience to play their part, the back door at the top of the Taper audience flew open to allow original Broadway cast member Mike Iveson to run down the aisles and take his place on stage as the Legion event timekeeper and moderator. After he set down the rules, Dizzia took her place at the center stage podium and proceeded to share not only about the creation, meaning and ambiguity within the document (which has led to its transformation over the years as American society has changed), but related its topics to her own life and family members. Her main focus centers on Amendments 9 and 14, the provisions which guarantee people rights not mentioned within the document, the definition of what makes an American citizen, states rights, the rights of “male” citizens to vote and hold office, and the all-important abolition of slavery.

Included is a frank examination of women’s rights beginning with the right to vote through the Roe v. Wade decision, granting the right for a woman to seek an abortion, a topic in the news almost daily right now, as well as unbelievable statistics about spousal abuse against women. These eye-opening facts and Schreck’s personal experience flood the authenticity of the piece thanks to the skill of Dizzia to grab your attention and never let it go. During her speech, Iverson is invited to share his own experience with the need for equal rights. As he removes the Legionnaire costume designed by Michael Krass, Iverson reveals his struggle to come out as gay and how his rights, just as women’s rights, have long been ignored in the Constitution. You could hear a pin drop during his presentation.

Lastly, original Broadway cast member Rosdely Ciprian, a sophomore in high school, is introduced as a fifteen-year-old debate champion who then takes on Dizzia about whether or not the Constitution should be overthrown and immediately rewritten or continue in place with the possibility of it slowly evolving to suit the more modern needs of American life as opposed to those when the document was written. The two women commanded the stage on opposite sites of the debate, with the audience encouraged to verbally react to statements made. Then, in the end, an audience member was selected to act as judge and jury to pick the winner, after which Ciprian and Dizzia answered questions submitted by the audience at a previous show. Thus, each performance is guaranteed to be unique, with local debater and high school freshman Jocelyn Shek alternating in the role with Ciprian.

‘What the Constitution Means to Me’ tickets range from $59-$175 and are available online at  CenterTheatreGroup.org, by calling Audience Services at 213-628-2772, or in person at the Center Theatre Group Box Office at the Ahmanson Theatre at The Music Center in Downtown Los Angeles, where the Mark Taper Forum is located at 135 N. Grand Ave., Los Angeles. “A Constitutional Conversation” event co-hosted by Los Angeles magazine will take place after the performance on Thursday, Feb. 27, followed by a panel discussion led by Editor-in-Chief Maer Roshan to discuss what the Constitution means to us all. Tickets for this performance and panel discussion are $150 and can be purchased by visiting CTGLA.org/LAMag. Additional student matinee performances of the play will be on Thursday, Feb. 27 and Friday, Feb. 28. For more information, please visit CTGLA.org/StudentMatinee. 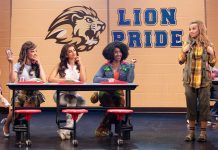