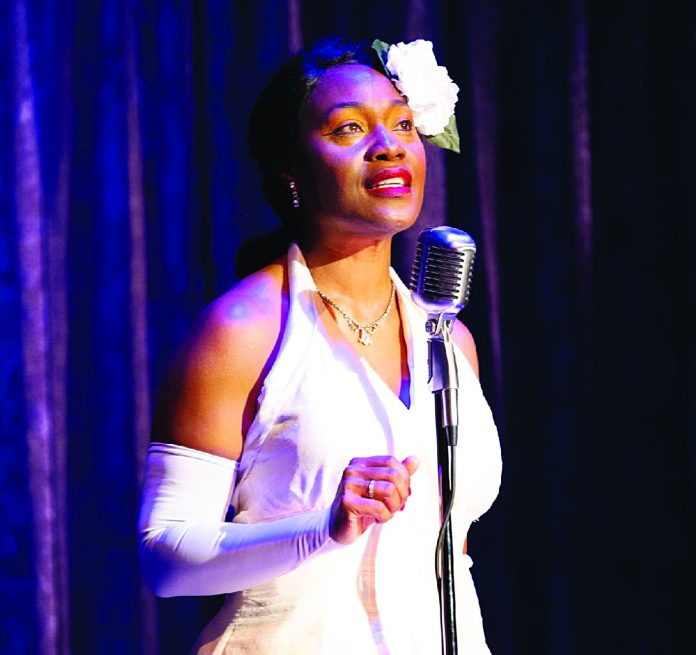 Billie Holiday is a legend of Jazz and arguably one of the greatest singers of the 20th Century. With her unique phrasing of lyrics, impeccable musicality, and hypnotic smoky tone, Lady Day was a vocalist who could convey a subtlety and nuance to the music seldom heard before. However, her talent belied a life filled with trauma, violence, and addiction. And even though the perpetual injustice and racial prejudice suffered by “colored” jazz musicians during the 1940s and 50s left an indelible impact on her, Lady Day persevered, delivering the music she loved so dearly on her own terms.

In the early 1980s, playwright Lanie Robertson wrote LADY DAY AT EMERSON’S BAR AND GRILL in which we are taken inside a small Philadelphia cocktail bar where Holiday performs just four months before she died on July 17, 1959, of cirrhosis of the liver due to her life-long drinking and drug abuse. As we witness one of her last performances, we are treated to more than a dozen musical numbers, including “What a Moonlight Can Do,” “Crazy He Calls Me,” “Easy Living,” “Strange Fruit,” “Taint Nobody’s Biz-ness If I Do,” and “God Bless the Child,” each performed to perfection by Deidrie Henry, every moment interlaced with salty, often humorous, reminiscences to project a riveting portrait of the lady and her music.

Robertson’s award-winning play shares the twists and turns of the unapologetic singer’s life path, offering humorous, heartfelt, and brutally honest stories of a child born to unwed teenage parents, who learned to live by the rules of the street at a very early age. Sharing her first job involved washing the marble steps of a local “fancy house” which, she learned, was the only place in town where men of all races were welcome to congregate together, she was soon tricked into the profession and nearly beaten to death. Holiday then set out on her own to find a better way to get off the streets, eventually singing in Harlem nightclubs as a young teenager.

About halfway through the 90-minute show, Holiday shares the most unsettling experience of her life that occurred when she faced fervent racism in the Deep South. Even though she was the headlining singer with the Benny Goodman Band, no backstage restroom facilities were available for her. Henry totally embodied the outraged singer’s disbelief and discomfort as she begged for the simplest of human comforts from the white hostess who was more concerned about the menus under her arm than Holiday’s physical need. And while you may disagree with how the situation was resolved, Holiday certainly made a name for herself and earned the respect of her bandmates and fans for not being afraid to speak up for herself in the face of such racial prejudice and inequality.

Skillfully directed by Gregg T. Daniel, Deidrie Henry first appears as Lady Day flying so high on heroin and booze that she doesn’t know where she is as she peeks through a curtain, sees Jimmy at the piano, the microphone center stage, and realizes she’s supposed to sing. But by the time she finishes, almost passing out from her addictions, she knows where she is and manages to hold the audience’s attention from start to finish. This was especially true when she returned to the stage accompanied by her extremely adorable pooch Ezer as Holiday’s dog Pepe, eager to please for the treats being offered to him.

Accompanied by Musical Director Abdul Hamid Royal as Jimmy Powers, whose fingers fly across the piano’s keys as his right foot explodes the drum beat, and James Leary coaxing the strings on his bass to vibrate your soul, Henry shines every moment as Holiday from her deepest lows to her magnificent vocal highs. And thanks to Thomas Ontiveros’ creative lighting design which brought a rainbow of colors to Henry’s flowing, white Marilyn Monroe-inspired ‘50s gown designed by Michèle Young, you won’t be able to take your eyes off Henry as she creates Jazz magic onstage. I left truly feeling as if I had seen the “real” Billie Holiday onstage, sad such a brilliant talent cut her career short at 44 due to addiction, but thankful her influence as an icon of Jazz music will live forever. 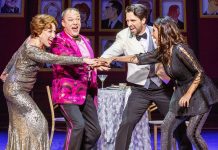 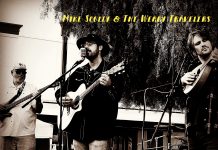