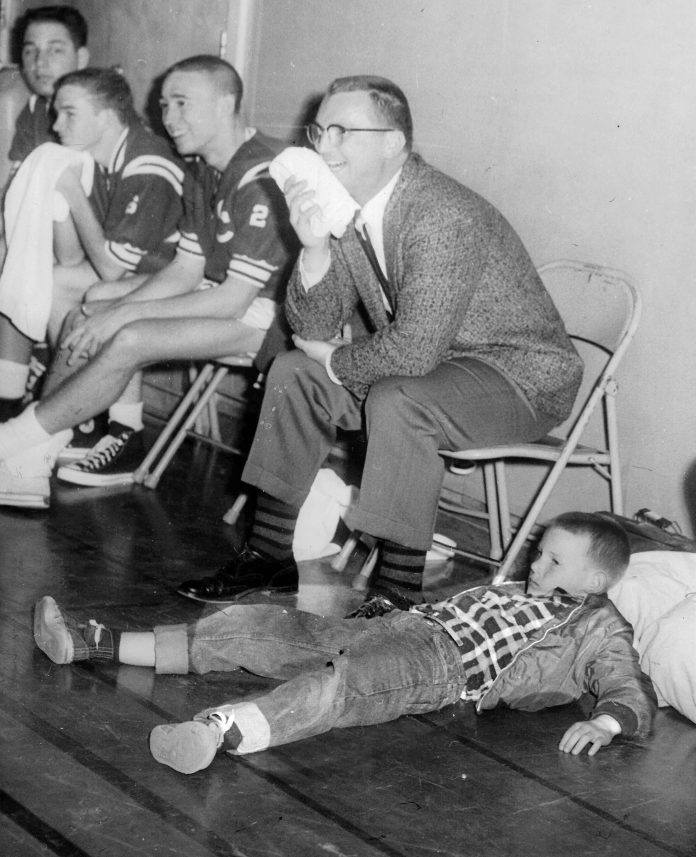 What gift might you give to Olympians who offer service long after leaving the field of competition?

The Olympians, ages 24 to 85, were awed by this gift that Mills presented to each of them at a special reception he hosted for them at a Culver City café. Mills supervised nearly 1,000 Olympian-related events, programs, commercials and public service announcement campaigns from 1983-2004.

“I wanted to thank these great Olympians who had always responded to the needs of the SCO and to me from the beginning,” said Mills, who is still involved in Olympian-related projects as an independent consultant.

The Hall of Fame Centaur football player credits Culver City High School (CCHS) athletic director Del Goodyear and a coincidental meeting with the “Wizard of Westwood” for paving the way for this special gift.

In 1996, Mills was securing Olympian interviews for one of the SCO’s sponsors for a syndicated national radio series named “The Olympic Report.” The show aired twice per day and led up to the opening ceremonies of the Centennial Olympics in Atlanta.  One of his fellow producers asked him to accompany him to Tarzana for an interview.

“I had no idea that John Wooden was going to open the door of that condominium unit that day,” said Mills.

“As we were leaving, I mentioned to ‘Coach’ that I was very close with Del Goodyear.  Suddenly, Wooden’s eyes lit up, and he invited us to his “trophy room” where images of his heroes–U.S. President Abraham Lincoln and Mother Teresa—were front and center,” said Mills.

Wooden then spoke glowingly of Goodyear, a World War II veteran who enrolled at UCLA following the war. Goodyear assisted the Bruin athletic program and became the basketball team scorer. When Wooden arrived at UCLA in 1948, they became longstanding good friends, according to Mills.

Wooden said he was proud of his friend Del for all he had accomplished as a teacher, coach and administrator at Culver High. He appreciated Goodyear’s assistance at UCLA, his friendship and his military service in World War II.  The peerless Bruin mentor, who became a sports icon while guiding the Bruins to an unprecedented 10 national titles, said he still thought of himself as a teacher first, noted Mills.

“He emphasized the difference that a good teacher can make in the lives of his or her students, and he had a profound influence on Goodyear’s career,” said Mills.

While playing football at Culver High, Mills often visited the Goodyear home.  He said Del was a father figure for him.  He learned that Goodyear and Wooden had great appreciation and respect for each other.

“Del was one of those quiet heroes who never blew his own horn but always encouraged those around him in his special quiet way. He teared up when I shared coach Wooden’s praise for him,” said Mills.

“I’d love for everyone to know how much he was admired by Coach Wooden,” said Mills.

“Del was a rock. Nothing bothered him. He showed me how to be strong in a humble way. Although he was heroic in World War II and a very accomplished athlete at UCLA, he never mentioned the war. He embodied his generation as a strong but silent warrior who got the job done. He was a disciple of Wooden’s “Pyramid of Success,” said Mills.

Goodyear died 17 days after the Olympian reception in Culver City in 2004.

“Coach Wooden sent me some heartfelt remarks to read to everyone gathered at Del’s funeral service at Grace Lutheran Church,” said Mills.

Mills and Del’s son, Greg, the team’s quarterback in the late 1960’s, have remained lifelong friends.

Burnishing the legacy left by his father, Greg Goodyear will be honored for his contributions to the CCHS athletic program during the Centaur-Dorsey Dons football game, Fri., Sep. 21, at Jerry Chabola Stadium.

Athletic Director Tom Salter will present the “Centaur for Life” award to Goodyear, who has built upon the achievements and good deeds of his late father.

Co-founder of the modern CCHS Athletic Booster Club, Goodyear volunteers as a recruiting coordinator to help graduating players obtain opportunities and scholarships to become collegiate student-athletes.  The fifth all-time leading passer in CIF Southern Section history, Goodyear has volunteered as an assistant coach at all levels of the Centaur football program for almost 50 years.