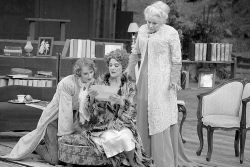 and “The Royal Family” at

proves just that. “The Royal

Family” provides a glimpse into

the lives of the famous family of

by George S. Kaufman and Edna

Ferber, the Cavendish family was

written as a parody of the real life

actor family the Barrymores, with

should, this one contains over the

characters, and this production

is brilliantly cast highlighting the

Geer family of actresses as well as

This play examines the sacrifices

made to live the life on

an actor, the cost of giving it up

and of course that inextricable

pull that the stage has to lure you

back, that only those who have

walked the boards themselves

can truly appreciate. The rustic

into the grand salon of an

sheer size of which adds to the

chaos and comings and goings of

the large cast. At times director

“Noises Off” cacophony of activity

that is balanced brilliantly with

With all of the melodramatic

Cavendish has a brilliant moment

when she exclaims to her beau,

with a hand flourish no less, “But

I’m an actress!” – that abound

throughout, the most dramatic

moment of the play is met with

to the heart of the matter.

manages to be genuine,

heartfelt and self-absorbed all

at the same time, and her grand

entrance can’t be beat. That is

until Tony Cavendish, played by

Aaron Hendry, enters in a tornado

of self-important bravado and

sweeps the entire household up in

his energy and enthusiasm. Both

but the real star of the show is

Ellen Geer as the matriarch Fanny

Cavendish. Her portrayal of this

once prolific actress who is now

on the declining slope of failing

health is something to behold.

zingers while wrangling her nutty

family one moment, then lets her

frailty show through the next only

to come back fighting and stand

on her own two feet. She is the

what the Cavendish family stands

The rest of the cast is rounded

out with a talented cadre of actors

with Alan Blumenfeld as Oscar

providing the buoy to which the

pandemonium can attach itself.

“The Royal Family” is a fast-paced

romp that will put a smile on your

face with its poignant portrayal of

what it means to be family.

Kat Michels is a two-time

writer with an AAS in video production

and a BFA in theatre. 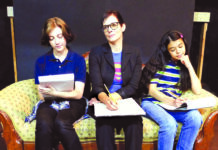 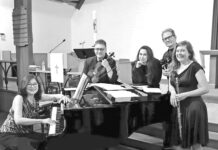