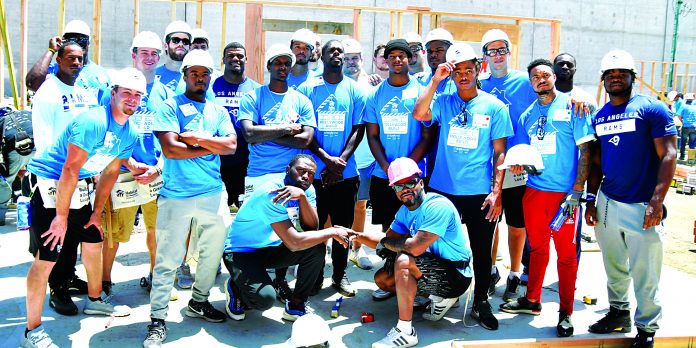 Last Friday Los Angeles Ram rookies put their footballs down and grab a hard hat, hammer and nails to help build 10 new homes in Culver City for Habitat for Humanity of Greater Los Angeles. You could feel the energy as soon as you walked into the construction site.

“First of all it’s awesome to be out here with my teammates and working together with them helping people and building houses and that’s pretty special,” said Brian Allen, who is a rookie offensive lineman from Michigan State. “This is my first experience with Habitat for Humanity and it’s pretty cool to be able to do the work that is actually going to help someone.”

Habitat for Humanity Project manager Beth Cobabe said it took a lot of time and effort to complete this mission in Culver City. “We have been working with Culver City for about eight years trying to put everything together,” said Cobabe standing in the middle of the project with a tool belt around her waist and a hard hat on her head.

“It took a lot of years working with the Culver City community and getting the right loans to fund this project,” Cobabe continued to say. “We are building six single-family homes and two duplexes.  It’s a big party today and it’s a big community event. We love the excitement the Rams and the workers and volunteers bring to the project.”

Another person that was really excited was Kaoru Mulvihill.  If her last name sounds familiar, it should. She is the mother of four boys who all attended Culver City high school. One of her sons Mason was one of the best two-star athletes in Culver City history. Kaoru and three of her boys will live in one of the houses built by Habitat for Humanity.

“Oh my gosh,” said Kaoru as she watched the workers work in her future home. “To see all of the people giving their time and their hearts to people they don’t even know to help build this neighborhood and community. We are so grateful.”

Kaoru is also thankful that her home will be equipped with handicap accessibility because one of her sons has Cerebral palsy. Cerebral Palsy is a condition marked by impaired muscle coordination. When a reporter mentioned that when her sons go to bed at night they will know that the Los Angeles Rams helped build their home, that put a smile on Kaoru face.

“To see the Rams and Hollywood stars gives a lot of voice to Habitat to Humanity and it shows what they can do for this beautiful city,” said Kaoru. “All my boys and I were raised here in Culver City. This is a complete community project that involved my church and other organizations. This is my town.”