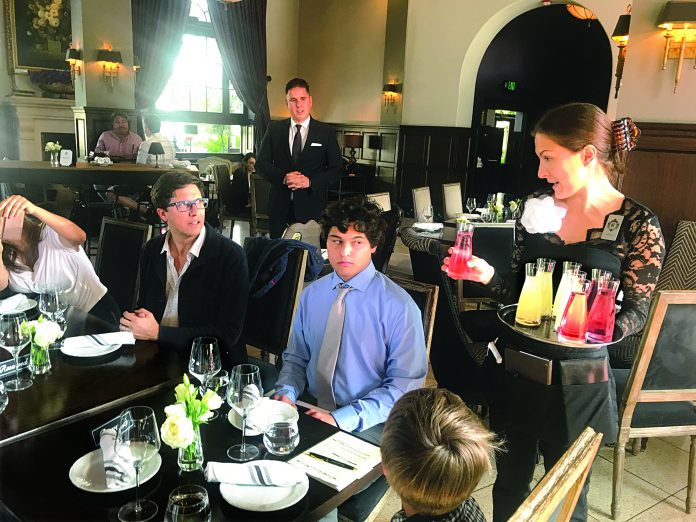 I went to the Culver Hotel for a food tasting at their fancy 4-Star Hotel and Restaurants. When I got there, the General Manager, Seth Horowitz, introduced us to Augusto, the Director of Food and Beverage, and Luba, our server. They sat us down at a table with fancy dishes and napkins. Then we got to eating.

So first of all, they paired our tasting with wine, actually it wasn’t really wine; it was juice with sparkling water, but it was super cool they did that.

The appetizer was a beet salad. They had red beets and golden beets, which I liked better, but I really liked the pomegranate seeds and the burrata cheese on the salad. As soon as we finished our salad I took a look around the room. I have come here to the hotel other times, but have never noticed the decorative pillars. At the top were curls and swirls of red designs. At the back of the dining room was a staircase leading up to a private dining room. This is a good place to come for a fancy meal.

At that point, Luba brought our main course, seared Maine Diver Scallops with broccolini, tomato garlic sauce, and pasta. Someone we were with was allergic to shellfish and they brought her chicken instead. I was not the biggest fan of the Scallop, but I loved the chicken which tasted grilled and had some salt on it. I’m not usually interested in chicken but this was amazing. I liked the Broccolini because it had balsamic vinegar in the sauce and tagliatelle pasta, which looks like long noodles and had chunks of tomato at the bottom.

Every time we got a new course, Chef Chris came out and explained what the next part of the meal was. It was interesting to have a Chef come out and explain the food to us. I’ve never experienced that before.

Finally, we had Creme Brûlée for dessert, which is a layer of sugar with custard underneath. It had slices of strawberries with blueberries along one side of the bowl. I asked the waitress if I could also have a cup of coffee. She looked at my dad in a confused way and said, “Is he allowed?”  My dad said “yes” and I got a cup of coffee. It tasted delicious!

After the meal, Mr. Horowitz gave us a short tour of the hotel. He put us in the elevator and we got off on the third floor and he showed us inside one of the rooms. It had a glass chandelier inside!  He left us with this quote “Even though we are a 4-star hotel, we give our guests 5-star moments.”  As you probably can see, the Culver Hotel is a very fancy place to eat, drink and stay.

I had a fantastic experience at the Culver Hotel. Both the food and service was impeccable. My chair was pulled out for me as I sat down, and beverages were immediately served. We were served water and given the option of a Pinot Noir (cherry juice with sparkling water drink) or a Sauvignon blanc (Lemonade). I never felt the need to flag down a server because before I ran out of my drink, our waitress, Luba, came with carafe refills and I never went a minute without something to drink. Our first course was a beautiful salad, which was brought out right away. It consisted of arugula, roasted beets, Burrata cheese, roasted macadamia nuts and pomegranate seeds. Every bite I took was filled with flavor and it was dressed to perfection.

One thing that stood out to me was how flavorful the arugula was. At most other places where I’ve had arugula, they taste bitter and ruin the meal, but here they tasted amazing. Our main dish was seared diver scallops over tagliatelle pasta with tomato garlic sauce, black pepper, and broccolini. The scallops were nicely seared. The dish had an inviting and colorful presentation. The inside of the scallops were just as tasty as the outside, which is something I haven’t seen before in my experience with scallops. Similar to the salad, the pasta wasn’t over or underdressed with the sauce. Lastly, we were given Crème Brûlée for dessert. An abundance of berries were arranged on top of the hard shell, which was satisfying to crack. The flavor was lavender, which I’ve never had before but enjoyed, and the custard was creamy and sweet underneath the shell. After we finished our food, the hotel’s general manager, Seth Horowitz, gave us a detailed tour of the hotel and told us about the hotel’s history. He told us about how the Culver Hotel was where the munchkins stayed during the filming of The Wizard of Oz, and the last remaining munchkin, Jerry Marren passed away a few days prior to our visit. He said that when Harry Culver created Culver City in 1917, his goal was Culver City being at the center of everything and bringing the movie industry here. We used to have MGM, RCA, Desilu, and others before Sony. In the “burning of Atlanta” scene from Gone With The Wind, the original set of King Kong was burned. We were then taken up the elevator and shown one of the guestrooms.

The room was styled with a combination of antique and modern design. The ambiance was inviting with all of the necessities for a comfortable stay. It had snacks, a bathtub, an armoire, a TV, which we were told was being upgraded in all the rooms and free WiFi. We went to another floor where they have a fitness center open 24 hours. We were fortunate enough to enter Harry Culver’s office and vault as well as the secret escape tunnel that leads to a private party room and eventually to the street level. The Culver Hotel is certainly one of the finest hotels in Los Angeles. Our group agreed that the food is some of the best we’ve had, and the lobby is gorgeous with many comfortable chairs for lounging and ample seats for diners. In addition, there is live Jazz music seven days a week after 7:30. Staying at the Culver Hotel is a must-do for anyone wishing to fully experience a luxurious and memorable stay in Culver City.

The Culver Hotel instantly draws your attention to the building’s historical look. When I entered the building, I was immediately given a warm welcome by the general manager, Seth Horowitz, and others. The restaurant part of the hotel whisks you away, back to 1920s with hint of modern design. The room was grand with its extra high ceilings and luxurious furniture. The hotel has seen a major improvement since the new owners came in. From a hotel founded by Mr. Culver himself to the famous cowboy, John Wayne to the new owners, the Mallick family, the Culver Hotel is one of the best hotels in Los Angeles. Now it is setting its sights on being one the best hotel in the state.

My cohorts and I were treated to a wonderfully prepared three-course meal. We started off with a roasted beet and arugula salad with macadamia nuts and burrata cheese. The salad had wonderful floral notes as the salad also included pomegranates. Another note is that every bite had the tang of citrus that was balanced with fresh burrata cheese. The beets came in two varieties, gold and red, both giving off this earthy flavor. For the main course, we were graciously given the market fish, which were scallops with tagliatelle pasta, served with a tomato garlic sauce. With the scallops being perfectly seared on both sides, the dish was prepared with the most care. All the ingredients had this extra depth and boldness as they were so fresh and meticulously prepared, especially the garlic. The scallops had this complex ocean flavor to them as they were salty, yet almost sweet at the same time. The only downside to the dish was that because it was a tasting, the proportions were a bit small with too few scallops; I wanted more! The choice of dessert was Crème brûlée du jour with a variety of berries on top. The hard sugar coating was like piercing the clouds to reach the sun, but in this case, the sugar coating was equally as delicious, custard as creamy and smooth as drinking cream itself. The lavender and vanilla inside concocted this heavenly scent. Overall, a 3-course meal of this stature fittingly belongs inside the Culver Hotel.

After the meal, we started on the tour of this idyllic hotel surrounded by the hustle and bustle of Culver City. As the hotel was home of the Munchkins of The Wizard of Oz during filming, the hotel has been adorned with displays of The Wizard of Oz. In the elevator, across the walls, there is the cityscape of Culver City, including the hotel itself. Each room is quaint and cozy with seamless integration between antiques and modern design. As we moved from section to section, I got to see how much detail went into each area, including a secret passage that leads to a speakeasy up above the main dining room. At the end of the tour, Mr. Horowitz commented, “Even though we are a four-star hotel, we give five-star moments.” I can definitely agree with that statement as you get quality of a secluded resort in a hotel in the heart of Culver City. As the hotel is a centerpiece of the community of the city, the Culver Hotel likes to give back to its community by being the venue for many events in the community. Harry Culver would be very pleased to see his vision today. 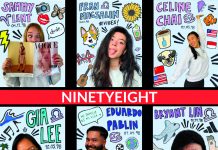 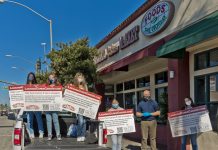