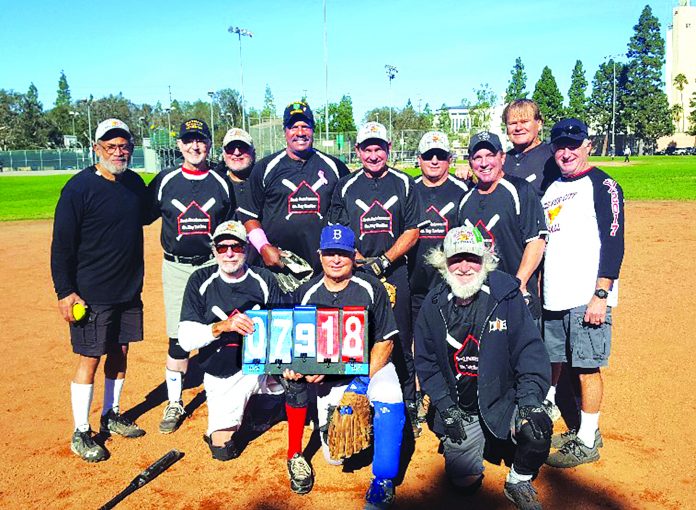 Cold and damp weather has contributed to aching bones, respiratory issues, and muscle fatigue for Culver City Senior Softball players, who under ideal conditions have enough issues bending to field ground balls, swinging at high-arc pitches, and running around the bases.

It’s all a part of the game for some 100 senior citizen athletes, who cherish the chance to play ball every Sunday morning at Veterans Park in a City of Culver City-sponsored league that has lasted almost as long as the lives of some of the old-timers still playing.

Men, ages 55 and older, and women, 45 and up, participate in the parity league sponsored by the Culver City Department of Parks, Recreation and Community Services. The league provides opportunities for its players to play a game they love and make new friends.

Seniors of all skill levels may visit managers during weekend morning practices or games at Vets Park to be drafted as a full-time or substitute player.

“Everyone hits, runs, fields, throws and jokes around as if the clock has been turned back to our younger days,” said league commissioner Rich Jebejian. “We tease each other and have a great time.”

BrokButcher.com recently took the league title for the second consecutive year by winning numerous one-run decisions in the playoffs.

“Every game could have gone either way, proving any team with luck could have won the championship,” said Butcher, a former Los Angeles Angels professional baseball player.

BrokButcher.com overcame a 6-run deficit in the ninth inning and a four-run hole in extra innings to defeat Galen Financial Green, 33-32, to reach the finals.