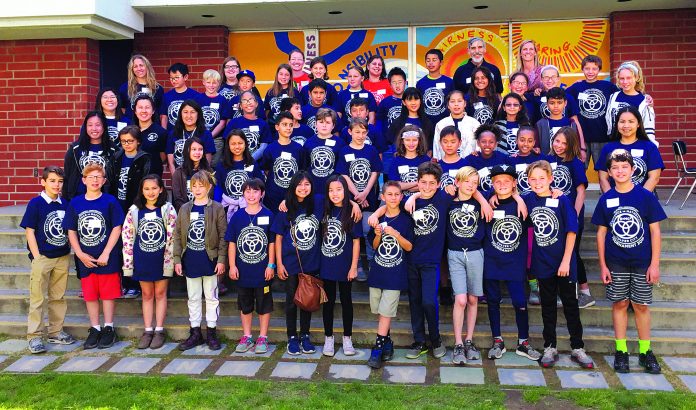 Nine five-member school teams from CCUSD were among the 178 Mathletes from throughout LA County who participated in academically challenging individual and team events. Linwood Howe had three teams competing, Farragut and La Ballona had two, and El Marino and El Rincon each had one team.

The team competition resulted in a five-way tie, including one team from CCUSD and the rest from other school districts and independent schools, who solved a total of eight problems correctly. After a five-minute tie-breaker, CCUSD’s El Marino triumphed as team champions. The team included Kylar Cheng, Eldrick Fan, Avi Sharma, Turner Algra and Konoko Gadt. These teammates also finished in the top tier of the individual competition, with Kylar Cheng solving all 10 problems correctly, Eldrick Fan solving nine, and Turner Algra and Avi Sharma completing eight problems correctly.

The problems in the competition are not typical classroom math problems. For example, in the individual event, each Mathlete had 30 minutes to solve 10 problems such as: “A scale drawing of the droid D4PO measures 96 mm by 32 mm. A similarly-scaled drawing of S3-D2 measures 60 mm by 40 mm. If the actual height of D4PO is 6 feet, how many inches high is S3-D2? (Answer below)

“Our goal in organizing the tournament is to create an environment where girls and boys who enjoy the challenges of mathematics can be with others who feel the same way, hopefully stimulating them to pursue STEM careers (Science, Technology, Engineering, and Mathematics),” said Jason Frand, the tournament’s chairperson.

After the individual and team competitions were over, while the teams awaited their results, Lin Howe parent Karly Salisbury solved the problems up on a big screen for all to see. As parents watched in awe and scratched their heads at the complexity of the problems, students huddled over their problem sheets, periodically exclaiming, “We got that one right!”

Every attending Mathlete received a certificate of participation to represent their accomplishment of being selected as a tournament participant from among the many students at their school. They also received a tournament T-shirt. Most importantly, they got the thrill and experience of academic competition in a challenging and fun environment. The tournament ends with the Math Cheer:

The Linwood E. Howe Math Tournament is sanctioned by the international Math Olympiads for Elementary and Middle Schools (MOEMS) organization in New York. The tournament committee spent months preparing for the event, and its success is due to the commitment of the committee, most specifically parent volunteer Meera Ichharam and retired principal Rosie LaBriola as well as office manager Anissa McCullen, teacher Greg Holman and principal Dr. Kim Indelicato.

Here is the list of all the Culver City Mathletes and their chaperones: