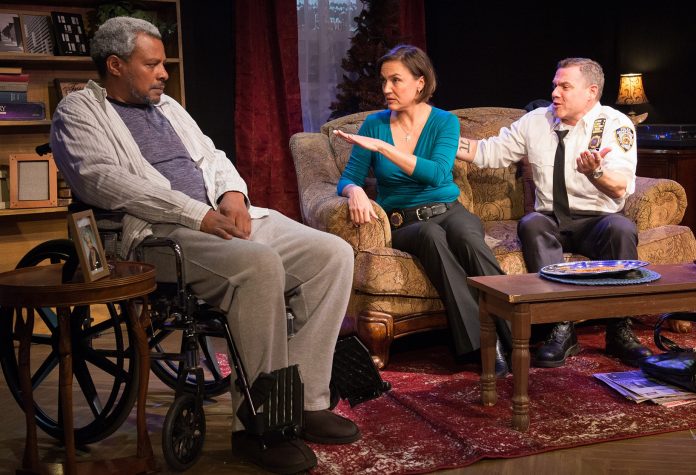 The Los Angeles premiere of the fearless Pulitzer Prize, New York Drama Critics Circle and Lucille Lortel award-winning comedy-drama BETWEEN RIVERSIDE AND CRAZY written by Stephen Adly Guirgis, is now onstage at the Fountain Theatre in Hollywood through December 15, directed by Guillermo Cienfuegos with a brutally honest understanding of human emotions fully on display by a talented cast of seven. “The play explores important issues of race, policing and gentrification – but in the end, it’s all about family, forgiveness, and redemption,” says Cienfuegos.

When asked what sparked the idea behind ‘Between Riverside and Crazy’, playwright Guirgis shared, “There were two events. The first was I moved into my sprawling, rent-controlled Riverside Drive apartment the night my mother died to take care of my dad because the idea of him being alone just seemed impossible to me. The other event was the “color of the day shooting” in which a white police officer shot a black undercover transit officer. It was a really sad case, and I knew I wanted to try and write about it.”

Guirgis’ play centers around a former beat cop and recent widower Walter “Pops” Washington, splendidly brought to life by Mantae Russel, on David Mauer’s split room set design, beautifully decorated by Shen Heckel and lit by Matt Richter, depicting his sprawling, rent-controlled New York City apartment on Riverside Drive. Following the recent death of his beloved wife, Walter opened his home to his newly paroled son, Junior (Matthew Hancock) and his somewhat crazy but always sexy girlfriend Lulu (Marisol Miranda, dressed to impress by costume designer Christine Cover Ferro), as well as his buddy’s son Oswaldo (Victor Anthony) who claims to be a recovering addict. But this makeshift family, unfortunately, cannot convince Walter to give up his love of the bottle. Tensions are always on edge, as even the slightest remark can result in a brutish display of emotion.

The core of Walter’s anger is based not only on the death of his wife but on the incident 8 years ago during which a rookie cop shot him six times, which he proclaims was the result of a racial slur being thrown at him. As a result of his career and physical well-being losses, Walter has been battling his former employer, the NYPD, to pay him what he thinks is fair, but without any success.  And now his friends from the force (Lesley Fera as Detective Audrey O’Connor and Joshua Bitton as Lt. Dave Caro) are attempting to persuade Walter to sign papers to close his outstanding lawsuit, while the landlord wants him out, the liquor store is closed, and the church is on his back thanks to the mystical Church Lady (Liza Fernandez) who attempts to heal him… all of which have left Walter somewhere between Riverside… and crazy.

All seven actors are to be commended for the heartfelt realism each brings to their portrayals, always underscored by secrets hidden beneath the surface just waiting to be revealed at exactly the right moment. Perhaps the most shocking incident occurs when Oswaldo returns from a visit with his real father in the Bronx, returning totally drugged out and ready to attack Walter for his credit card in order to purchase more drugs and a hooker. Their emotional confrontation, staged by fight director Jonathan Rider, is so shockingly real, gasps of surprise could be heard throughout the audience. And I could go on and on about other noteworthy scenes, if space allowed, as the entire production is just that well done.