When Piper and I found out we were going to interview Rachel Maddow, we were elated. Both daughters of politically engaged parents, we had watched her for as long as we could remember, her signature blend of wit and earnestness the soundtrack of our adolescence. This made it all the more exciting when, thanks to Michelle Mayans and KidScoop Media, we had the opportunity to ask questions to Ms. Maddow on her tour promoting her new book Blowout, a deep dive into the destructive effects of oil and gas companies to democracy, foreign and domestic.

Waiting in the lobby of the Saban Theater in Los Angeles, we people-watched as we waited for our interview time slot. It was inspirational to see how many people had turned out; the venue teeming with civically active guests of all ages and races. Our press passes were of particular interest to those who came up to talk to us (one man excitedly showed me his homemade “whistleblower” shirt, most just thought we were working the event and wanted to know where the bathroom was).

When it was finally time for the interview to begin, we were ushered into a green room just off of the stage. Escorted in by two publicists, Ms. Maddow entered the room with a smile.

“So we’re both high schoolers,” Piper began. “We were wondering, did you always know you wanted to be a journalist?”

Aside from being the editor of her school’s newspaper in 6th grade, Maddow told us that she wasn’t formally trained in journalism. Instead, she went to college for public policy and ethics and later got a Ph.D. in politics related to activism.

“I ended up in journalism kind of by accident,” Maddow explained, “I was working odd jobs, and I took a job as a sidekick news girl on a morning zoo radio show. I sort of fell in love with it.”

Transitioning into a discussion on her book, Blowout, I asked, “How did you get interested in the topic of oil and gas companies?”

“I did not set out to write a book about the oil and gas industry and I have no natural expertise in the issue. I was interested in things that led me to that as a topic and one of them was: why did Russia attack us in 2016, and why did they attack us using those weird tactics, that was strange.”

The host of MSNBC’s The Rachel Maddow Show, she is no stranger to discussing the 2016 election interference.

“Speaking of activism, obviously this book deals with a lot of weighty topics. If people are kind of disturbed by what they’re hearing, what do you think they should go out into the world and do?” I then asked.

She explained that, although it would be of interest to those already studying this issue, “it’s not a real activist book in the sense that I’m not really prescribing the things that need to be done.”

She went on to describe a story that took place in Oklahoma, a conservative state often dominated by fossil fuel interests. “Oklahoma school teachers and other regular folks stood up against the oil and gas industry, basically to save the schools in their state.” Although it runs counter to many political calculations about the effectiveness of grassroots activism, she emphasized that “it was this really super effective, noble thing that worked against all the odds.”

Her breakthrough moment in both her life and the plot of the book was her realization of the importance of “small-deed democracy,” the little acts of political courage that can change a conversation.

“In a democracy, there’s nothing stronger than the will of the people, you just have to be willing to apply it.” 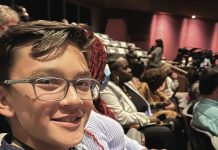