Carrying a significant lead over their peers as the final count of votes came in, Kelly Kent and Paula Amezola De Herrera are set to claim the two available seats on the Culver City Unified School District School Board. The two cumulatively received over 50% of the vote, and the first runner up — Scott Zeidman — trails by almost 10 points.

Kent will be serving her second terms after being nominated to the board in 2015. The incumbent has a PhD in Neuroscience and serves as a neuroscience consultant and adjunct faculty at Antioch University Los Angeles. Both of her two children attend CCUSD schools.

Kent cites the passage of the district’s Safe Schools Resolution in 2016 as one of her proudest achievements of her first term. The resolution came soon after the 2016 presidential election in the wake of parental fears about the district’s cooperation with law enforcement for deportation detentions.

The resulting resolution declared all CCUSD campuses as “Safe Zones,” and said the schools within the district won’t allow law enforcement agents looking to deport those without documentation without a review process.

Kent has also been noted as an avid Black Lives Matters supporter, with the Culver City Police Officers Association taking aim at her views on policing in August.

The video highlighted a tweet in which she expressed support for protests in Downtown LA in July with #SolidarityWithPortland and #carenotcops. Portland has been one of the most epicenters of George Floyd protests in the country, with demonstrations starting on May 28 and still continuing today.

Amazola will be replacing Anne Allaire — who was serving as clerk and finished the race with the fourth most votes — on the school board. Amezola is the Founder of the Public Health Career Services at the Keck School of Medicine at University of Southern California, and serves as an advisor there. Locally, Amezola has been the commissioner of the Culver City Parks, Recreation and Community Services Commission since 2017.

Amezola has noted several issues she wants to tackle during her tenure, the first being one that was shared by her peer. College preparedness has been a prominent issue this election cycle, with candidates like Amezola pointing out the 59.6% college preparedness rating according to the California School Dashboard.

While this rating is considered generally favorable in comparison to other systems — individual groups rate higher than the state average are the school has been placed in the second highest tier overall and — there are large discrepancies between certain groups.

However, less than half of the socioeconomically disadvantaged students at the school were considered college prepared, and that number declined by over 6% in 2019 for African American students: down to 41.3% of students prepared for college in that group.

However, both of these numbers are significantly higher than state averages, with just 35.8% of socioeconomically disadvantaged and 23.7% of African American students in California high schools being considered prepared for college in 2019. 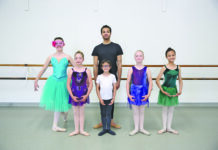