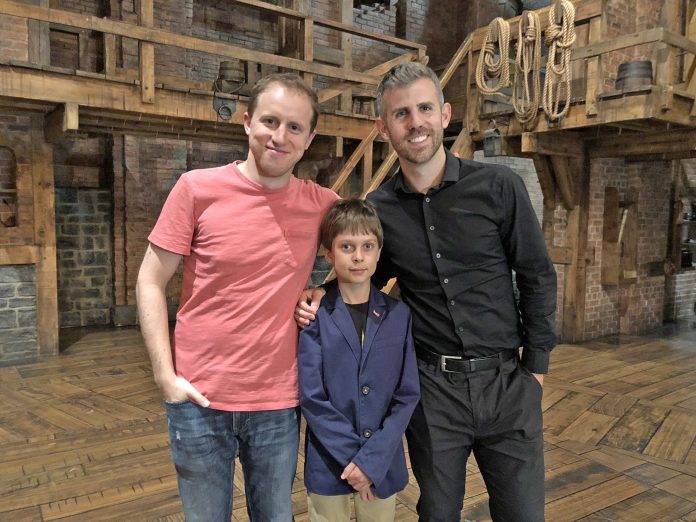 The backstage meeting is a theatrical landmark experience

I have been listening to the music of “Hamilton,” the Broadway Musical by Lin-Manuel Miranda, for one and a half years. I also love the “Hamilton Polka” by Weird Al. So when my mom surprised me by telling me that I was going backstage to meet some of the people that work on the show, I was so surprised that I didn’t know what to make of it. Usually, when I do a Kid Scoop Media article, she tells me about a month ahead. But I guess she figured out that I always say “Yes” but I just take a long time to decide.

I didn’t know what to expect. When we got to the stage door at the Theater in New York City, people were flowing out of the door with watery eyes, coming out of the last show of the day. I had not seen the show yet (and had tickets to see it the next day) and had mostly only listened to the first Act, which I guess by coincidence just so happens to be the happier part!

A security guard came and took us inside where we stood right in the middle of the stage; it was weird to be on the stage not having seen the show. It looked different than I expected, and it was a lot fancier.

Later, we found out that the style of all the wood and all the ropes on the stage were based on boats from the period of time Hamilton lived. As we walked out on stage two men came and greeted us. They were Ian Weinberger and Kurt Crowley, the music directors and conductors of Hamilton on Broadway. They took us through the side of the stage back to their office, which used to be a dressing room.

In the office, they pulled out the big book of music that they use to conduct the orchestra and play the piano. The book was gigantic! I was interested in the record scratching part before the song “The 10 Duel Commandments.” I learned that it was one of the sounds that the music editor designed for the show and they told us the percussionist, a person who plays instruments that you hit like drums and cymbals, makes these sounds by hitting an electronic pad.

They also told us that Hamilton was in previews for three weeks; previews for a musical mean an audience can see the show before it opens. This means the show can change a lot during that time, and three weeks of changes and having to remember them must be hard, especially since it took Ian 6 months to learn all the music for the show in the first place. I asked if people ever make mistakes when there are changes and they said yes.

But all that hard work has paid off because, on Aug. 6, 2018, Hamilton celebrated its third anniversary with 1,250 performances and five companies performing the show (New York, Chicago, London, and two tours running around the country).

Then the next day, as I walked down Broadway toward the theatre I saw golden posters with black writing on it to represent the actors which I recognized from the soundtrack art. As we sat down in our seats and the musical started, I noticed the voices sounded different than on the soundtrack.

I liked some of the actors better than the original cast and in some cases, I liked the original better, while some were about even in my eyes. It felt different to see people acting it out after only hearing it on the soundtrack for so long.

Sometimes I only listen to the songs that I know but since you can’t pause or rewind the show you have to listen to everything in order. My favorite song was “Guns and Ships” because at one point, Lafayette jumps off a table without knocking it over, and if I tried that I’d definitely knock it over! I also really liked “Eye of the Hurricane” even though it was a little bit sad.

At the end, as the lights came up, everyone was sitting still in their seats with tears in their eyes and as I was walking out of the stage door I remembered all those people I saw the day before and knew how they felt.