Can you feel it? Thanksgiving is just around the corner. The stretch of time between Labor Day and turkey day and is a long, exhausting one in which it seems everyone has put the lazy days of summer behind them for a sustained burst of energy to get things done before the relaxation of the holidays. Relaxation of the holidays? Well, in theory.

The idea is that we work hard during September, October and November and reward ourselves with some R&R, veg out and eat ourselves sleepy as we watch the annual Lions and Cowboys games. The long weekend, thus, reinvigorates us to endure the last few weeks before the Christmas and New Years’ holidays.

But if ever that was the case, it certainly isn’t anymore. Let’s begin with the week of Thanksgiving. Rather than coasting into the holiday, the half-week has morphed into five days jammed into a highly concentrated three. Everything that was expected to get done over the course of 40 hours has been condensed into 24 – in fact, considering all the packing, travel arrangements, grocery shopping, wine-finding and errand-running, the whole hectic to-do resembles the TV show of the same name (number?).

Not to worry, at least one can relax after all that prep work. Not so fast. It’s now Wednesday, the single-most congested day of the entire year. Roads become parking lots. Minutes become hours. Miles become marathons. Worse yet is the airport. If the pat-downs, shoe-removals, body scans and bag X-rays don’t slow your pace, the weather delays just may. And if nature doesn’t interfere, the next hurdle is ensuring that nobody on the plane has a name remotely similar to anyone on the government’s No-Fly List. Otherwise, you’ll be doing a sky U-turn with no honest explanation as to why.

Assuming after all this, you do manage to arrive at your destination. Thanksgiving is usually spent dodging political conversations and trying to keep certain family members sober. Friday is like a repeat of Wednesday, only in a mall. Saturday is Wednesday in reverse (everyone has to drive/fly back). And that leaves Sunday to unpack, unwind and prepare for the week ahead. 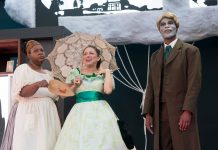