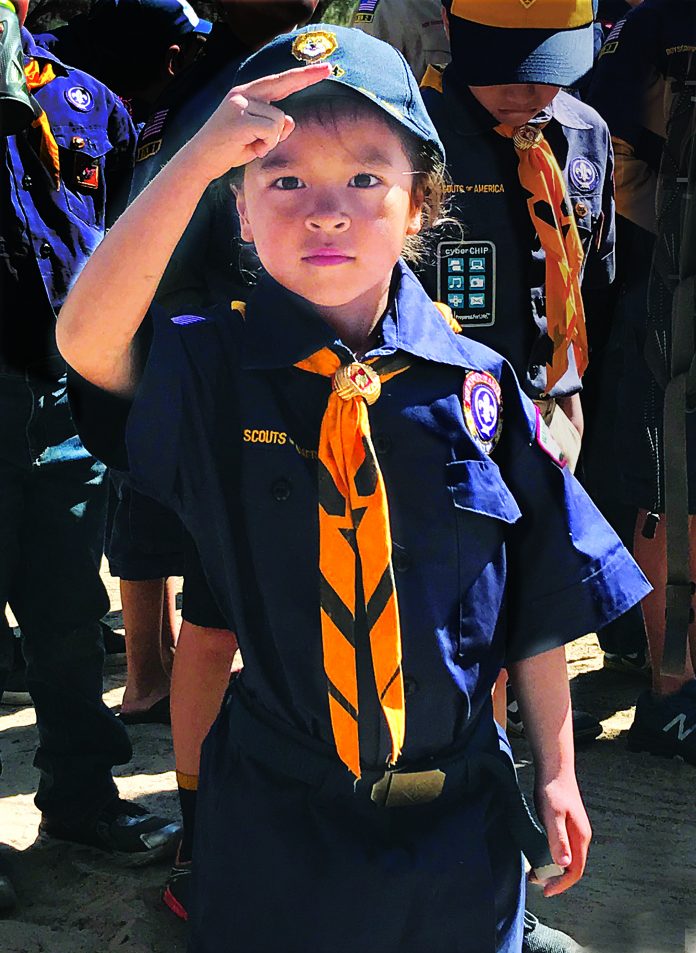 Culver City is making history once again as it becomes one of the first cities to host an integrated Cub Scout pack. Pack 461 for the first time is accepting girls into their ranks. The Pack currently has 60 cub scouts, 16 of which are girls.

Stevens said the organization’s curriculum of night safety and outdoor skills will remain the same for both boys and girls.

“The books are the same,” Stevens said. “In fact, there hasn’t been any time to change the text of the books to reflect the addition of girls. Sometimes the books include only pictures of boys or the material may refer to “boys” as opposed to “scouts.”

Stevens said the response to the addition of girls into the Pack 461 has been overwhelmingly positive. In fact, depending on the type of girl a parent has, she would find great happiness and success in either the Cub Scouts or Girl Scouts.

“If you have a girl who is really into camping and the outdoors and likes going on lots of hikes and is interested in learning some of these outdoor skills like how to be safe with fire, how to be safe with a knife, then maybe Cub Scouts would be a good fit for her,” Stevens said. “If your girl is into more community building and learning leadership skills, and job skills, then I think Girl Scouts is a good fit for that girl.”

Despite the positive response from most parents in the community, Stevens said that he has faced some resistance to the integration of the Cub Scouts. A mother recently told him that she wanted her son in a place where “boys could be boys.”

Stevens doesn’t give much weight to that argument, which he says is a minority opinion, citing how boys and girls are already together in school every day. He said changing the scenery to a campground instead of a classroom would not make much of a difference.

While Stevens is happy about the introduction of girls into the cub scouts, he made a point to highlight the importance of making sure both boys and girls feel welcomed in the pack.

“While I’m very excited to welcome girls into the Cub Scout program, it is important to me to make sure that we continue to support our boys as well,” Stevens said. “I’m very proud of my 4th grade son – Seattle Stevens, who has been in scouting since he was 6 years old as a Tiger Scout. He has been a great guide to his little sister Magnolia as she joins the [461] pack and starts navigating her adventures.”

Stevens said both boys and girls can benefit from their experiences in the Cub Scouts because it teaches kids to be their best and exposes them to fun, challenging activities while also teaching them outdoor skills, leadership, and civic responsibility.

“All of these lessons are imparted in a fun and exploratory atmosphere,” Stevens said. “Cubs earn advancement each year by earning the rank for their grade level. To earn your rank, scouts go on a series of activities called Adventures – examples of adventures include Outdoorsman, Building a Better World, Rolling Tigers (bicycle safety), Baloo’s Picnic Basket (cooking and healthy eating), and the Whittling Chip (knife safety). Their rank is awarded to them in a ceremony in front of the whole pack, and is given to them upside down at first. They are able to turn their rank right-side up when they “do a good turn” – or perform a good deed that their parents deem worthy.”

Stevens said performing good deeds is at the heart of the Scout’s belief system.

“One of the backbones of the Scouting belief system is to ‘Do a Good Deed Every Day,’” Stevens said. “We start teaching that in the Cub Scout program by providing opportunities for our scouts to serve their community. We do a food drive called Scouting for Food, we volunteer at a food bank during the holidays, and we perform neighborhood cleanups and other services to our community.”

Pack 461, established in 2018, is proud to be one of the nation’s first Family Packs – offering the iconic Cub Scouts program to both boys and girls. As Cub Scouts, your child will have tons of fun while they earn badges, build racecars, enjoy the satisfaction of meeting challenges, and form lasting friendships.