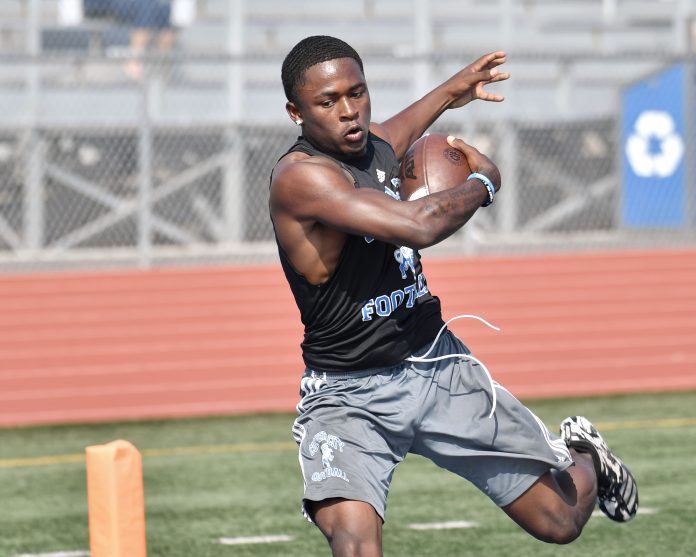 Culver City hosted its first 16 team passing tournament this past weekend, and it was challenging to get a good field of teams because there were other established tournaments already scheduled, including the Mission Viejo Tournament, which attracted some of the top programs in Southern California, and the Redondo Tournament which was in its 8th year. But because of the hard work of Tournament Director and Centaur coach Dovie Reed and Head Coach Jahmal Wright, they were able to secure a field that arguably had stronger teams than the Redondo Tournament.

Coach Wright and his staff were committed to putting together a first-class tournament, and to making it one of the best-run tournaments in Southern California. There were a few minor glitches that occurred before the tournament, including one team dropping out a couple of weeks before the tournament, and two teams dropping out in the last few days before Saturday. Nevertheless, the other coaches were thrilled by the proximity of all the fields, the number of viewable fields with good seating, and the fact that a time clock was used making it possible to start the games on time. Centaur coach Derrick Huezo also provided the sound system and music throughout the tournament and the fact that the head coaches and Officials were all fed lunch, made this tournament a unique event. It was first-class all the way.

Culver City began pool play against one of the better and more athletic teams in the tournament, the Pasadena Bulldogs. The Cents did not expect this tough a team in the first game of the tournament, but the Bulldogs gave them all they could handle. On the first play of the game, Zevi Eckhaus hit Amari Pait with a bomb, and the Centaurs went up 6-0. Pasadena came right back to even the score at 6. Both teams went 3 and out, and then Eckhaus hit Chris Miller for a TD making the score 12-6. The Cents then held Pasadena and struck again, Eckhaus to Khary Crump, to move ahead 18-6. But the Bulldogs would not run away with their tails between their legs. They quickly struck for 2 TD’s tying the score at 18. Culver and Pasadena then traded touchdowns making the score 24 all. With little time remaining, Eckhaus struck on a long TD pass, making the score 30-24. The Dogs ran down the field and had the ball on the 2-yard line with 4th down and seconds remaining, but time expired before they could run another play and the Cents escaped with the win.

In the second pool play game, Culver City played a local west side school in the Palisades Dolphins. The Cents jumped out to an early lead and were ahead 20-6 around the halfway point. The coaching staff inserted some non-starters to get them playing time and Palisades rallied and nearly beat the Centaurs. With little time remaining, Culver was ahead 20-18. On their last possession, Eckhaus hit Amari Pait for a touchdown to make the final score 26-18. The other touchdowns went to Chris Miller, Legend Waring, and Khary Crump, and Chris Miller also had an early interception.

In the final pool game, Culver played the North Torrance Saxons. The Cents jumped all over the Saxons early and often, taking a 24-0 lead before cruising to a 30-12 win. On the first play of the game, Eckhaus threw a bomb to Tanner Duve, and his other three touchdowns went to Mekhi Evans-Bey, Waring, and Crump. The defense shined as they intercepted 3 passes. Juniors Nick Funes, Quinton Chapman, and senior Enson Bravo each had one pick.

The teams broke for lunch, and the seedings for the championship round were determined. The top criteria for seeding were the best record in pool play. In addition to Culver, Notre Dame, Crespi, and Crescenta Valley went undefeated in pool play. The next tiebreaker was points allowed and based on that criteria, Notre Dame got the number 1 seed, followed by Crespi, then Crescenta Valley, with Culver City seeded 4th.

After a hearty lunch, play resumed. Culver City faced 13th seeded Granite Hills High. The Cents thoroughly dominated the game-winning 62-0. The scoring included 9 touchdowns and 4 interceptions. Touchdowns went to Crump (2), Dylan Clark (2), Makhai Cope (2) and one each to Miller, Duve, and Waring. The interceptions were by Miller, Funes, Bravo, and Richard Farias.

In the Quarterfinals, Culver City faced a familiar foe in the Los Altos Conquerors, who they recently defeated in the Bonita Tournament. The defense once again shined as they only allowed one touchdown and one other first down. The final score was 32-6. Eckhaus threw 2 TD’s to Miller and Pait, and one to Crump. Chapman had the lone interception.

In the Semifinals, Culver City lost to the Division 1 Notre Dame Knights who went on the win the Championship against Palos Verdes 20-8. In the consolation finals, Antelope Valley beat South Torrance 18-8.

In talking to several coaches about how they felt about the tournament, it was the consensus that the tournament was well run, fast-paced, on time, competitive, organized, and that the referees were very competent. In fact, an assistant coach from North Torrance said, “I have been to many tournaments in the last few years, and this was by far the best tournament I have ever been to.”

Kevin Rooney, long-time head football coach at Notre Dame, was asked how he felt about the tournament and he replied, “It was great. It was fast-paced, organized, and on time all the time.” When asked if he would come back, he said, “I would love to come back.”

In trying to make it a first-class affair, Coach Wright made sure that his coaches were timing the events to ensure a high-quality atmosphere, and our trainers did a great job of scoring the games and making sure that anyone that got hurt got good care.