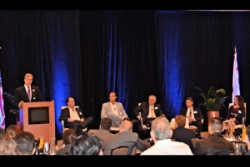 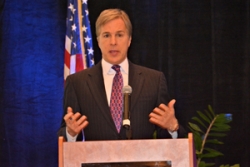 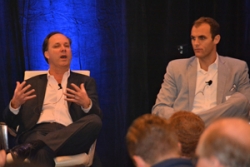 A panel of commercial, retail and residential brokers urged city, property owners and residents to come together now to focus on breathing new life into the Fox Hills area.  The panel was hosted by the Culver City Chamber of Commerce’s Fox Hills 2.0 event on March 3 at the DoubleTree by Hilton Hotel Los Angeles-Westside.

“The city needs to create a plan and get going, otherwise those tenants will go elsewhere, like El Segundo,” Steve Kolsky of Newmark Grubb Knight Frank said. “With everything happening at Playa Vista, the momentum is certainly there for Fox Hills to take advantage of, but you can’t wait.”

Kolsky joined four other panelists: James Keefe of CBRE, Doug Marshall of The Klabin Company, Lee Shapiro of Kennedy Wilson Properties, and Heather Coombs Perez of HeArt Team @ Cavanaugh Realtors, in sharing, with a crowd of more than 100 business people, their views for the future of the Fox Hills area. Robert Kovacik, award-winning reporter and anchor from NBC4 Southern California, moderated the panel discussion.

The suggestions from the panel ranged from changing the name of the neighborhood to providing a facelift in order to take advantage of the myriad of cutting-edge, high-tech companies growing up around it. While the city has long focused on its booming Downtown district and other areas of the city like West Washington and the Hayden Tract, little has been done for Fox Hills outside of the 2009 renovation of Westfield Culver City.

“Fox Hills is in a great location – close to the airport, close to Playa Vista, close to Howard Hughes Center, but today, there’s no reason for people to stop there,” said Shapiro of Kennedy Wilson properties, “With the right plan, this could be a great location for more restaurants and more retail.”

Kolsky said the city wouldn’t have to reach more than a mile to get all the business it needs.

“If you just worked with what is already here and provided the amenities for the people who live and work within a one-mile radius, you’d be fine,” he said. “You don’t need to attract millions of people from all over, you just have to capture what’s already here.”

Coombs Perez of HeArt Team @ Cavanaugh Realtors, said that the residential real estate market has already seen a significant increase in the past two years as high-tech companies move into Playa Vista and their well-paid employees look for places to live, close to where they work but with some separation.  But there is still room for improvement in Fox Hills.

“We need better connectivity,” she said. “We need to have ways for the people is the residential area of Fox Hills to reach the new restaurants, to ride their bikes where they want to go.”

Coombs Perez said new streetscape design and public infrastructure would go a long way in making the area easier to navigate and more pedestrian friendly – something which would increase property values even more.

With all the ideas for new restaurants, retail, residential, entertainment uses and infrastructure improvements, the panelists wrestled with the conundrum of how to pay for the improvement of the area in a post-redevelopment world. During the days of the Redevelopment Agency, the city had a number of tools it could use to encourage and assist property owners in redeveloping a neighborhood to suit the city’s vision. It could even purchase properties itself and either build what was needed or sell the property to a developer with guidelines on what needed to be built.

Redevelopment Agencies across the state were shut down several years ago, with many California cities finding themselves in the same boat as Culver City – with areas that are ripe for redevelopment but with precious few tools to help make that redevelopment happen quickly.

In the wake of the state’s decision on redevelopment, Culver City developed a vision for Fox Hills called “Reimagine Fox Hills.” a plan envisioning new creative office space in the existing office parks in the hills above Westfield Culver City along with a new “main street” area, new high-speed fiber Internet infrastructure and other improvements. Last year, a group of major Fox Hills property owners put forth a plan for a new entertainment and hospitality district that, they said, would encourage property owners to redevelop the area by providing new land-use incentives and opportunities for revenue-producing signage that could be shared with the city.

Regardless of which direction the city goes, the panelists agreed that it was time to make changes.