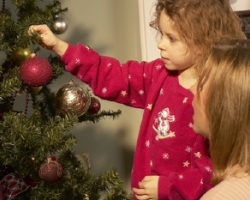 They say that art imitates life. For me, however, sitting in the Ahmanson Theatre, this art hit a little too close to home. I hope you had the chance to see 33 Variations during its run. It was a wonderful production with beautifully unique sets, a wonderful pianist, a superb cast and an intricately woven script of passion and drive. Despite all of this, or possibly because of it, I spent the evening watching Dr. Katherine Brandt, played by Jane Fonda, die slowly from a degenerative disease, and her daughter Clara, played by Samantha Mathis, struggling to come to terms with her new reality. I found myself reliving the experience of watching my own mother die of a degenerative disease step by painful step. I saw the performance the day after the anniversary of my mother’s death.

For the first time, however, I was able to see the role that I played in the drama that was my childhood – the hurt and betrayal of having the extent of the illness kept a secret to protect a daughter; the grudging realization and submission involved in becoming a caretaker for one’s parent before being ready for the role; the burning need to do something, anything to feel alive, healthy and whole after being around so much decrepit illness, and then the guilt of being able to do those things while she is no longer capable. But mostly, I relived the yearning for more – the tearful Hallmark moment where mother and daughter hold each other, crying, and she expresses in words how much love she has and how proud she is, and wishes that she could be around to see her child get married and meet her grandchildren. But, she knows that her girl will be strong enough to do it without her.

I didn’t have this moment. I don’t know anybody that has, and 33 Variations didn’t have it either. Instead Dr. Gertrude Ladenburger, played by Susan Kellermann, pulls Clara aside and tells her to stop waiting for that moment. That she has to take what she does have and make that good enough, because it might be all she’s getting. This moment stands out like a shining beacon of truth – harsh truth, yes, but truth nevertheless, and a truth that took me years to realize on my own. A life spent wishing for the things that one doesn’t have or didn’t get is a life spent in regret. It is certainly not the life that my mother wished for me as she held me in her arms as a baby, not knowing that before too long both of our lives would be rocked by her illness.

So I get my memories: Making Strawberry Shortcake ornaments one Christmas long ago; trying to beat each other at the license plate game show, and watching CHiPs and Magnum P.I.; the look in her eyes when she told my dad that we had adopted a dog from the local animal rescue because he had taken too long to find a pure breed. These are the things that I get. It’s not much, but on most days it is enough. On the days when it isn’t, I have art. The false reality of a good book, a cheesy movie, a sweeping landscape or the subtle nuances of a well-produced play that remind me of what I do have. I have the memories of my mother, both good and bad. And I also know that she did the best that she could and loved me until the day she died. Today, that is enough.

Kat Michels is a two-time regional Emmy award-winning writer with an AAS in video production and a BFA in theatre. She is currently freelancing as a production coordinator and film editor in Culver City.