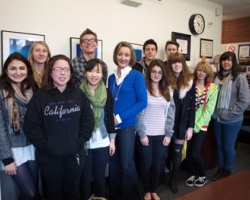 Culver City High School (CCHS) art students from the school’s Academy of Visual and Performing Arts (AVPA) were recently recognized for their exceptional talent by the Scholastic Art & Writing Awards, a nationwide arts competition open to all high school students.

At the regional level, seniors Lara Evans and Benjamin Mullen were awarded top honors – Gold Key awards – for their individual art pieces in visual art. Junior Azalie Welsh earned Gold Key status for a collection of poems. The three students will continue to compete in the national adjudication in New York City for further scholarship and award consideration.

The awards ceremony and exhibition will be held Saturday from 7 p.m. to 9 p.m. at The Armory Center for the Arts, 145 N. Raymond St., Pasadena, where the winners of the Regional Scholastic Arts Awards competition will be recognized for their achievements.

The Gold Key award recipients from the Academy of Visual and Performing Arts will have their artwork displayed in the galleries at The Armory. The exhibition will run from March 27 to May 1 in the Mezzanine Gallery.

AVPA’s co-executive director, Kristine Hatanaka, noted, “Art competitions like these are highly competitive. Scholastic Art & Writing Awards is one of the most competitive because it includes all schools in the entire Southern California region. If a student achieves a Gold Key, they are competing with students all across the nation.”

Welsh, who won for her five-poem collection, Itch, said that winning the Gold Key award gave her a “true sense of accomplishment knowing that my work was evaluated by professionals in their field. The transformation from a perception of what I wrote coming only from myself to my work being judged and acknowledged is a unique and rewarding experience. It’s such a meaningful achievement to have received this recognition and now competing at the national level with students across the nation.”

For nearly 90 years, The Scholastic Art & Writing Awards has sought to identify and document the outstanding achievements of young artists and writers in the visual and literary arts. In that time, nearly 13 million students have participated, nine million have been recognized, and $25 million in awards and scholarships have been made available. Nationwide, 165,000 students in grades 7 through 12 participate in the competition. At all levels, artwork is judged by three criteria: originality, technical skill and personal vision or voice.