I have been following the multi-award-winning Fountain Theatre for several years as their plays are always thought-provoking, mind-bending, artistically creative, and socially confrontational. So, I knew when the announcement went out that their new outdoor stage would be presenting the Los Angeles premiere of AN OCTOROON, a radical, incendiary and subversively funny Obie award-winning play by Branden Jacobs-Jenkins, my longing to return to live, in-person theatre drew me to attend very early in the run. And it was so exciting to be back in an audience (with safety protocols in place) and be able to greet so many theatre friends I had not seen since early 2020!

This outrageous deconstruction of a moustache-twirling melodrama by 19th century playwright Dion Boucicault, who adapted the play from the novel ‘The Quadroon’ by Thomas Mayne Reid (1856), concerns the residents of a Louisiana plantation called Terrebonne.

When originally presented, it sparked debates about the abolition of slavery and the role of theatre in politics, making ‘An Octoroon’ a perfect piece to be presented right now. Fountain production dramaturg Dr. Daphnie Sicre shares that the play, “is a perfect example of embodying critical performance race theory, as it takes a deep look into the relationship of race, racism and power on stage while making you confront the controversial truths of racial history that still plague the United States today.”

Director Judith Moreland’s highly-styled staging seems to run the gamut of a myriad of styles, often channeling an off-beat vaudeville revue as well as a modern-day farce and antebellum melodrama. So while I was confused at first about exactly what I was watching, the innovative staging and talented cast certainly filled the lovely outdoor space with a welcome change to challenge my overall comprehension in a myriad of ways. And that is what thought-provoking theatre is all about.

The cast is led by Matthew Hancock who first takes the stage as a modern-day Black playwright struggling to find his voice among a chorus of people telling him what he should and should not be writing. But when he decides to adapt his favorite play about an illicit interracial love, Boucicault’s ‘The Octoroon’ (which opened in New York City in 1859 four days after the hanging of slave-rebellion leader John Brown in Harpers Ferry, West Virginia), the Black playwright quickly realizes that getting White male actors of today to play evil slave owners will not be easy.

So, he decides to play the White male roles himself and proceeds, in full view of the audience, to don whiteface make-up. What ensues is an upside down, topsy-turvy world where race and morality are challenged, created to tell the story of an octoroon woman (a person who is one-eighth Black) and her quest for identity and love within the framework of slavery at a Deep South Plantation.

The cast (most of whom play more than one role) includes one of my favorite local actors Rob Nagle as Boucicault (although he begins the play taking on the persona of a Wild West Native American by donning red face make-up); Hazel Lozano as the production assistant (which requires her to take on many roles, all played in blackface make-up); Mara Klein as the octoroon, Zoe; and Vanessa Claire Stewart as Dora, a rich Southern belle (ala Scarlett O’Hara) in love with the plantation owner (who is also played by Hancock). Meanwhile, Leea Ayers, Kacie Rogers and Pam Trotter portray three startlingly modern slave women whose gossiping seems more appropriate for the Kardashian sisters! So of course, even when the story seemed too confusing to follow, these three talented actors kept the audience in stitches of laughter!

‘An Octoroon’ brutally satirizes racial stereotypes in a funny and profoundly tragic whirlwind of images and dialogue that forces audiences to look at, laugh at, and be shattered by America’s racist history. In fact, during intermission a series of graphic images, old movies and cartoon clips showing the ever-present racism in early media were quite eye-opening to look at, given our current equality-driven world. At times, the play certainly seems to both provoke and offend from all sides, right down to showing a clip of Shirley Temple in blackface in “The Littlest Rebel” (1935).

Kudos to the entire design team for their technical brilliance in creating such an attractive and creative space in which to present ‘An Octoroon,’ which runs through Sept. 19 with performances on Fridays, Saturdays, Sundays and Mondays at 7 p.m., except July 30 through Aug. 2 and Aug. 27 through Aug. 30 which will be dark.

Tickets range from $25–$45 with Pay-What-You-Want seating available every Monday night in addition to regular seating. The Fountain Theatre is located at 5060 Fountain Avenue (at Normandie) in Los Angeles 90029. Arrive early for limited $5 per car parking lot across the street. For reservations and information, call 323-663-1525 or go to  www.FountainTheatre.com. 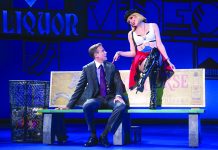 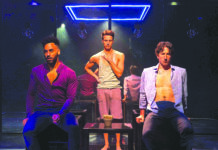