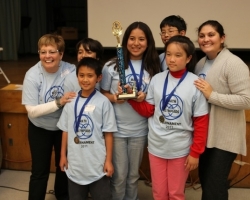 Fifth-graders Tanner Patton of Farragut Elementary School and Pavan Tauh of El Marino Language School finished the individual round of the tournament with eight of 10 word problems solved, as did Sarah Gonzalez and Anthony Pineci, both of The Mirman School for Gifted Children in Brentwood.

The first- and second-place medals were won outright by Ethan Zuo of Meadows Avenue Elementary School in Manhattan Beach and Mirman’s Kevin Shao, with individual scores of 10 and nine points, respectively. But only after a second tie-breaking round did Patton emerge in third place, tying with Mirman’s Pineci. Tauh took fourth place, sharing the prize with Gonzalez.

There was less drama in the team competition, in which groups of five students were given 20 minutes to solve 10 problems for three points each. Yet, in this round, the weekly team practices, coaching in critical-thinking and teamwork strategies, and two joint practices for all CCUSD competitors were clearly evident, paying substantial dividends.

The Linwood Howe Math Olympiads Tournament is the regional, year-end competition for elementary school students in the international Mathematics Olympiads for Elementary and Middle Schoolers (MOEMS) series. The 2011 tournament drew competitors from 16 schools and eight districts in Southern California. Students from all five CCUSD elementary schools, 35 in all, qualified for the tournament.