The experience of being a descendant of immigrants to America began Sri Rao’s journey to commemorate his mother’s favorite Indian recipes, along with his knowledge of the Technicolor Utopia of Bollywood films his family watched together while eating, into his cookbook BOLLYWOOD KITCHEN so that his happy childhood memories would remain intact for future generations.

Now transformed into an interactive “dinner and a movie” experience of the same name, produced by the Geffen Stayhouse in association with Hypokrit Theatre Company, the World Premiere of Sri Rao’s ‘Bollywood Kitchen’ invites us to prepare a homemade Indian meal along with him, drawing on the recipes that were staples at his family’s table.

As we join him in cooking these delicious dishes in our very own kitchens, Rao interweaves the story of his parents immigrating to America, the joy and nourishment that Bollywood musicals brought to his whole family, and the culinary traditions they shared. Mouthwatering flavors come together on the screen and in person with the colorful exuberance of Bollywood films creating a festive and fun virtual experience about rediscovering the comforts of home.

Prior to your scheduled performance, you will receive a beautiful Bollywood Box containing spices, dry ingredients and recipes delivered to your home. In addition to key recipe ingredients, your beautifully-designed box will include a shopping list for the perishable items you will need to purchase to complete each dish, as well as pre-show food prep instructions so that you can prepare everything in real time with Sri.

You can choose to either cook your meal in advance and enjoy it as you watch the show, prep the ingredients beforehand and cook along with Sri in real time, or relax and enjoy Sri’s performance and storytelling, and cook at any time that’s convenient for you.

As the scrumptious meal is prepared, Sri shares stories about his parents, who began their life together via an arranged marriage in India and were then separated for eight years while he father moved to America to study Civil Engineering at Virginia Tech. Listening to how his father learned to adapt to such a different place when he arrived reminded me of stories my father told me about arriving in America from Poland when he was 8 years old, speaking a foreign language and overwhelmed by the new world around him.

After sending each other daily love letters via air mail while separated half-way around the world (just like star-crossed lovers in many Bollywood films), Sri’s parents finally reunited and moved to Mechanicsburg, PA where he was born into one of the few families of color in the entire town. And like my family, his celebrated the joy of being together and honoring their traditions by joining together for large family meals, usually centered in the kitchen.

And it is one of those meals Sri prepares during the show, which includes a Mumbai Mule cocktail, Chicken Curry (by the way, curry just means a “sauce”) or Vegan Chana Masala, Basmati Rice, Bollywood Popcorn, Cucumber Raita (a mouth-cooling yogurt side dish), and a Chocolate Chair Affogato dessert drink, all of which viewers can make and enjoy along with him.

A limited number of pre-selected audience members virtually cook alongside and interact with Sri throughout the show, providing them with an opportunity to ask Sri questions and get tips along the way. Thus, the entire experience feels like a big party, even though each participant in in their own home, thanks to the common experience of learning to prepare and then enjoying the same food together, all the while chatting about life in general.

No doubt the experience will soothe your soul and make you feel less alone during this time of isolation, almost as if you have been invited to a big party to celebrate the joy of Bollywood films as well as the delicious flavors of India.The world premiere of ‘Bollywood Kitchen’, written and performed by Sri Rao, Directed by Arpita Mukherjee, and Produced by the Geffen Stayhouse in Association with Hypokrit Theatre Company, continues at 4 and 7 p.m. on Fridays and Saturdays through March 6. Run time is 75 minutes with no intermission. There are multiple tiers of ticketing options priced at $40 – $175 per household, available by phone at 310-208-2028 or online at www.geffenplayhouse.org. 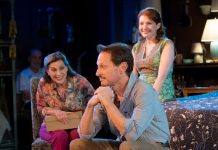 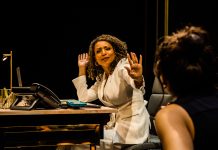 ‘King Liz’ performs at Geffen and ‘Air Play’ at The Broadstage