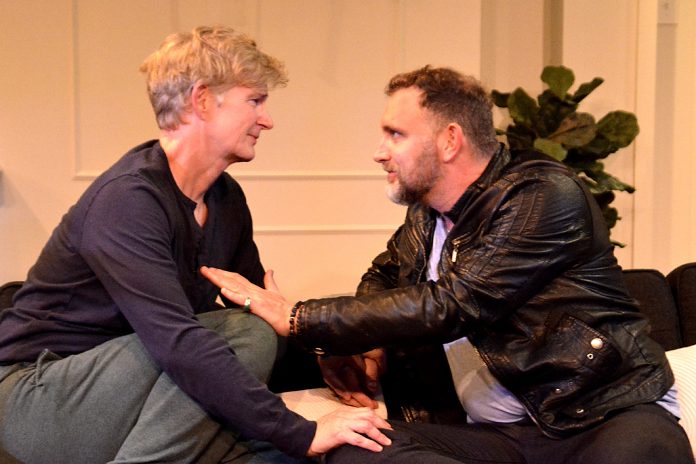 When does a rule of law take precedence over a law of the heart? Which should you follow and when? It’s an age-old question, now between couples of all sexual orientations, when the topic of marriage is brought up between people who have been together for a long time but never wed. And while we have the right to marry, is it really necessary if two people are in love and committed to each other?  Isn’t that enough? But what happens when it isn’t?

A bold commentary on love, commitment and family in our perilous new world, the Southern California premiere of DANIEL’S HUSBAND, the funny, passionate, and poignant 2018 off-Broadway hit play by Michael McKeever, reunites director Simon Levy, who helmed the Fountain Theatre’s 2013 award-winning production of The Normal Heart, with the stars of that production, Bill Brochtrup and Tim Cummings. This time, the two play Daniel Bixby and Mitchell Howard, a seemingly perfect gay couple. What isn’t so perfect is that Daniel desperately longs to be married, but Mitchell doesn’t believe in it.

Beginning in the very well-appointed home (thanks to scenic designer DeAnne Millas) shared by award-winning architect Daniel (Brochtrup) and the equally award-winning novelist Mitchell (Cummings) after a dinner party with Mitchell’s literary agent Barry (Ed F. Martin) and his latest boy toy Trip (Jose Fernando), their consumption of alcohol and delicious crème Brulee leads to the question of why the two have not gotten married after living together for 7 years. A heated discussion follows, and even though the Supreme Court legalized same-sex marriage in 2015, we soon learn that not everyone believes in the need for a piece of paper to unite two people in love and committed to each other, no matter their sexual orientation.

Certainly the skill of these four actors in presenting honest and truthful characters, and Simon Levy’s skill at keeping them intertwining with each other as the conversation switches sides, will have you looking at your own behavior in relationships with piercing insight, especially for those of us walking that same line between “do we or don’t we” from many sides of the same argument.

But it is when Jenny O’Hara lights up the stage as Daniel’s self-centered and overbearing mother Lydia that things really get going.  Her outspoken, “open mouth insert foot” personality frustrates and angers her son to no end.  It’s very apparent the two men tolerate her presence for a few short visits a year, especially when she gets on the topic of marriage and how she suffered with her artist husband.  So much so, in fact, she laughs at how she went after him with a knitting needle.  O’Hara will make you hate and understand Lydia as the caring mother she is, if totally for the wrong reasons and perspective.

Soon Mitchell arrives home with an advance copy of his latest “trashy gay love story” novella when the subject of marriage comes up again. Now it seems Daniel is at the point of no return in his desire to cement their partnership legally, especially to be able to call Mitchell his husband. A loud argument ensues, with both men making equally valid points for both sides when an unexpected turn of events puts their perfect life in jeopardy. This is the turning point in McKeever’s play, and I hesitate to reveal any spoilers other than to say the two are thrust into a future where love may not be enough as Mitchell must use the laws of his own heart to fight the rules of law.

Be prepared to be amazed at the intense and utterly heartbreaking situations, perfectly scripted, acted and directed by this brilliant team, which arise as the question of legal guardianship surfaces. And bring Kleenex. And walk away in awe of this outstanding production sure to be a hit at next year’s Ovation Awards.

DANIEL’S HUSBAND runs through June 23 with performances on Fridays at 8 p.m.; Saturdays at 2 p.m. and 8 p.m.; Sundays at 2 p.m.; and Mondays at 8 p.m. at The Fountain Theatre, located at 5060 Fountain Avenue (at Normandie) in Los Angeles. Tickets range from $25–$45; Pay-What-You-Want seating is available every Monday night in addition to regular seating (subject to availability). Secure, on-site parking is available for $5. The Fountain Theatre is air-conditioned and wheelchair accessible. Patrons are invited to relax before and after the show at the Fountain’s indoor/outdoor upstairs café. For reservations and information, call (323) 663-1525 or go to www.FountainTheatre.com.