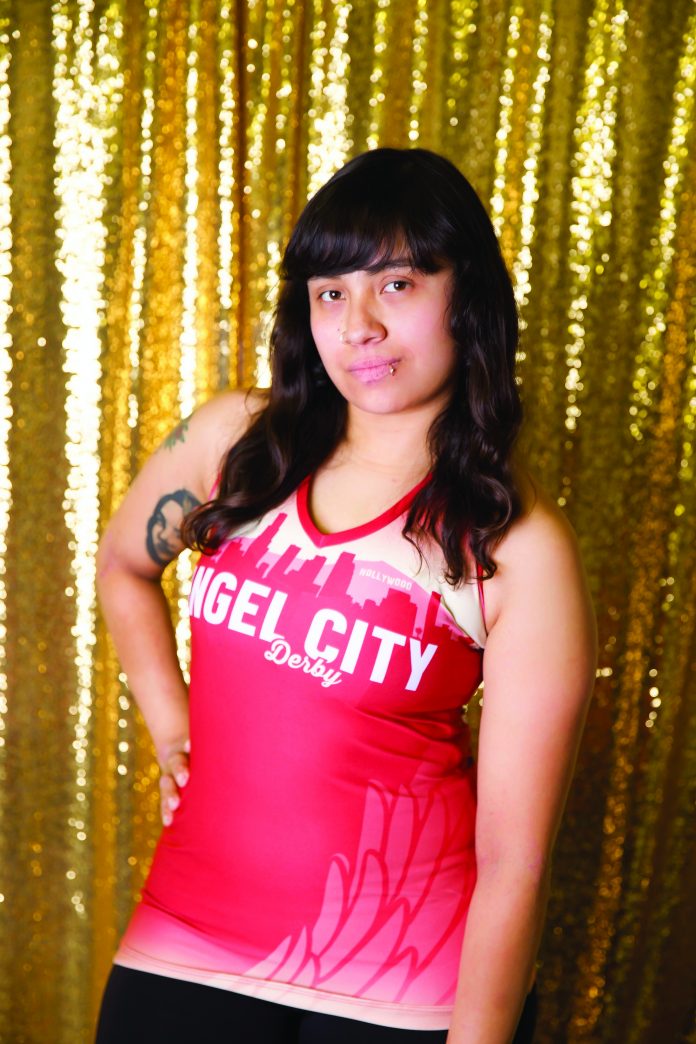 Vanessa Rodriguez discovered the sport of roller derby as many people once did: through the 2009 movie “Whip It.” It’s your traditional, teenage rebellion kind of movie directed by Drew Barrymore, starring Ellen Page as a rebellious indie-rock loving teen who seeks to escape the life her mother has set up for her.

The only twist is the venue which she rebels against her mom’s strict ways. She meets a roller derby team that caught her eye in the same way Rodriguez’s eye was caught by the action of the sport.

But for Rodriguez, it took a little bit more than just a movie for her to take the leap and try something as different as roller derby. What ended up sealing the deal was being able to truly see and experience it with her own eyes.

“I remember seeing roller derby players in person for the first time at the Culver City Car Show in downtown Culver, they were skating around so effortlessly and passing out flyers,” Rodriguez says.

Rodriguez has lived in Culver City her whole life, attending Linwood E Howe elementary school as a child and ascending up the CCUSD system until she graduated from CCHS in 2013.

“I have been lucky enough to have lived in a very small radius in my 24 years in Culver City,” Rodriguez tells me.

Soon after Rodriguez saw the skaters at the car show, she discovered Angel City Derby through their Instagram page. The team was holding open sessions for a New Recruits program at Moonlight Rollerway in Glendale, and Rodriguez knew this was the opportunity she was looking for.

“I had just recently bought myself a pair of roller skates and decided to dive in,” Rodriguez recalled.

As is traditional with roller derby in the past, Rodriguez picked out a name that she felt would embody what she wanted to be out on the track. She decided to go with “VeeNasty”, a nickname she jokingly acquired from her friends.

“My friends would always say, ‘oh Vanessa has left the building VeeNasty is here,’” Rodriguez explained. “I jokingly would say it was my rapper name for a long time, but when it came to picking a name for derby, it was an easy choice in picking VeeNasty.”

For Rodriguez, “VeeNasty” represents not only the vigor with which she wants to play roller derby, but also the manner in which she lives.

“For me, it embodies a type of gusto and attitude that I carry through my day to day, but shines bright when I strap my skates on,” Rodriguez divulges. “It’s this kind of badass, carefree, no prisoners sense of self that doesn’t hold back.”

Despite only being with Angel City Derby for a year with a break in the way due to school, Rodriguez has already found herself at home with the various teams she has been a part of.

“My experience with Angel City Derby has been so fulfilling and positive, every league member has been so welcoming and inviting from my first day there.”

“I’m not much of an extrovert and it takes time for me to warm up and feel comfortable when I meet new people, so encountering so many new individuals in team settings was definitely out of my comfort zone.”

Of course, you can’t be a part of a roller derby team without actually knowing how to play roller derby and how it works.

“Whenever I mention the rules of derby people aren’t confused by what the actual rules are, there confused that there are even rules in the first place,” Rodriguez admits.

Rodriguez admits she is still learning, but eventually, these things just click. For Rodriguez, it happened with her rather recently.

“I’d say there was one week about a month or two ago, that something finally clicked in my head and that’s how it goes,” Rodriguez remembered.  “All this practice on and off skates, watching other teams’ games and applying the various skills on skates, leads to that one moment at practice or scrimmage.”