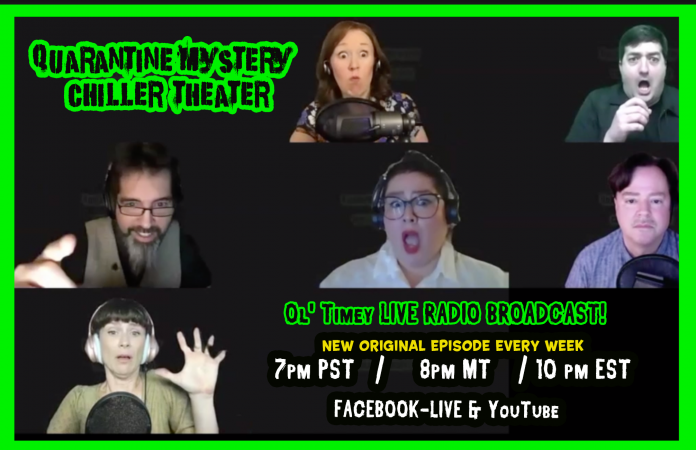 Quarantine Mystery Chiller Theater was conceived by Jeff LaGreca and Suzanne Slade as a tribute to the “Old Timey Radio” broadcasts of the 30s and 40s as a creative response to the Covid-19 pandemic. Originally intended as a distraction for immediate friends and family, the Saturday night Quarantine Mystery Chiller Theater listenership has grown over the weeks since its first episode premiered on Saturday night, March 28.  All weekly half hour episodes are presented free of charge with original scripts and stories written specifically for each one, and introduced by the Gruesome Lady and her twisted cohorts, who then tell strange tales of the weird and absurd to her listeners.

The QMCT Players troupe consists of writers and actors in Los Angeles, New York and Denver and began as a weekly LIVE “radio” broadcast in the tradition of the Mercury Theater Players. It is assembled on Zoom broadcast and then presented “live” to Facebook and YouTube. In the early episodes, all the foley and sound effects were performed live by Suzanne Slade, but since then, the troupe has moved to digital means. Because, hey, we’re all stuck at home anyway! So stay in, stay safe, stay hopeful, and stay entertained with Quarantine Mystery Chiller Theater on Saturday nights on 7pm on Facebook Live at https://www.facebook.com/QuarantineMysteryChillerPlayers/

On Saturday, June 20, I tuned in for QMCT’s Episode 13, an online reading of “Backstage Murder” written and directed by Kelly Brighton and produced by Jeff LaGreca. The story centered on the much-hated Artistic Director of The West Hollywood Theatre Company, Finishing The Hat, who is found murdered backstage. Was it his Board of Directors? One of his secret lovers? A disgruntled actor or stage hand?  The fun, of course, is in trying to figure it out before the truth is revealed – or another murder takes place!

The episode also featured a Quarantunes commercial parody of Broadway show tunes, written by Amanda Conlon, and a Gruesome Lady segment written by Jeff LaGreca and featuring Suzanne Slade. Also featured in the cast with this talented trio were Kelly Brighton, Susan Davis, Brian DePetris, Philip McBride, Brian McMullan, Karey Montoya-James and Jose Restrepo. Zoom technology allowed each cast member to appear as needed for each scene, with each in separate boxes on screen while staying safe at home. To increase the reality, as well as the creepiness of the story, each actor appeared against the same dark background, with several donning different costume pieces to designate their character changes.

See what you missed by watching Quarantine Mystery Chiller Theater past episodes on their YouTube page at https://www.youtube.com/channel/UCa9zZlpoEIN9kIlcg9tRaCQ/videos