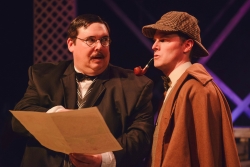 Do not read this review. I’m serious. Stop reading. Sacred Fools production of Watson and the Dark Art of Harry Houdini is one of those productions that is littered throughout with little surprises and hidden gems that render it impossible to talk about without revealing something to the reader.

Trust me when I say that you want to discover all of those things for yourself. All you need to know going in, is that this is the best piece of theatre I have seen all year. So dear reader, stop reading this and go see the play.

You can thank me later. You’re still reading aren’t you?  I bet you were one of those kids that opened all of their Christmas presents beforehand. Fine then, read on, but you can’t say that I didn’t warn you.

Watson and the Dark Art of Harry Houdini finds Sherlock and Watson traveling across the pond to New York following a trail of grisly murders. Their investigation leads them to Harry Houdini and the dark arts he is renowned for practicing.

However, it is unclear just how entangled Houdini is in this sinister web. Unlike your typical Sherlock Holmes story, this is Watson’s story and Jamie Robledo, who wrote and directed, does a masterful job with the script.

The dialogue is clever and witty, and incorporates touches of our modern vocabulary to great effect. As this is Watson’s story, the characters around him seem to represent what he loves about them the most.

They each live in their own world, yet those worlds blend together seamlessly with Watson at their center. The story is tight and engaging. In the second act things slowly start to unravel, but just when they are about to lose you for good it is revealed that there is a method to the madness, and it all becomes clear.

This production is like a magic trick that will keep you enthralled, but instead of being disappointed when the secret is discovered at the end, you love it even more because the only deception employed is your own willingness to overlook the obvious.

This script creates some big shoes to fill, and Robledo’s casts completes the job admirably. Scott Leggett as Watson is genuine and heartfelt in his quest for the truth and provides the stable pillar for the rest of the cast to buoy themselves to.

Joe Fria portrays a bit of a bumbling, childish, egotistical Sherlock and he is hysterical especially when bickering with Mycroft, the understudy Troy Vincent appeared the night of the review. Donal Thoms-Cappello is the perfect adversary for Sherlock as the cock-sure and mysterious Houdini.

However, it is Graham Skipper’s ridiculous and fantastic Sigmund Freud that steals the show. The men are rounded out with CJ Merriman as the haunting Mary Watson and Carrie Keranen as the spot on Violet Hunter.

Robledo also employs a crew of five Stagehands to assist with the scenery and to fill in all of the sundry roles to round out the story.

A huge thank you to production designer Michael James Schneider and the design staff for proving that a 99 seat house is not only worthy, but capable of producing a well thought out and executed design.

Robledo’s sound design coupled with Ryan Johnson’s original compositions are fantastic providing a range from subtle ambiance to a character unto itself. Matt Richter paints the set with a gorgeous lighting design that serves to create mood, depth and guide the eye of the viewer to what is most important.

The sets comprised of a platform with four sets of stairs and lattice work to decorate the legs (narrow curtains hung at the side of the stage to mask entrances and exits) was utilitarian in its simplicity, but with the help of the Stagehands and movable pieces, lived and breathed as the play progressed forward creating stunning, flowing visuals that set the stage perfectly for Linda Muggeridge’s beautiful period costume work.

My only complaint, and I do have one, is to do with the fight between Watson and Holmes, and the carnival roustabouts. I have yet to see a truly exceptional piece of stage combat in Los Angeles, so my expectations are not high.

However, Andrew Amani’s choreography for this fight was beautiful and had all of the potential to finally set the bar for a good fight in Los Angeles. Unfortunately the execution of the choreography left a lot to be desired.

Watson and the Dark Art of Harry Houdini is not a play that will cause an existential dilemma or heated debates on the drive home. However, in the realm of an interesting story told extremely well for the sheer entertainment value of telling it, Sacred Fools hits this one out of the ball park.

Kat Michels is a writer, two-time Telly and Regional Emmy award-winning documentarian, poet, Los Angeles theater critic and above all else storyteller. She is in the process of writing her first historical fiction novel, In a Time Never Known. www.katmichels.com