The “Culver/Washington X” refers to the intersection of Washington and Culver Boulevards in Downtown Culver City.  Although the “X” is still identifiable, let me share a photo that clearly showcases the “X” in Downtown Culver City in early times.  This photo can be dated back to the late 1920s.   One can see the Culver City Hall, on the site our current city hall, under construction.  It clearly reads  “Culver City” on the roof.  That structure opened in 1928.  It faced Culver Boulevard, (Putnam Avenue at the time). The shorter building under construction just beyond it on the east was Culver City’s Fire Station #1.  The street on the west is Duquesne Avenue.  The block west, at the bottom of the photo, is bounded by Lincoln Avenue today.  The frontage on Culver, between Duquesne and Lincoln) became the site of the Gateway Station Post Office in 1940.

Just above the center of the “X” intersection, the Culver Hotel, built by Harry Culver as The Hotel Hunt, is identifiable.  Below the center of the “X”, the Hull Building, in which Akasha Restaurant occupies the first floor, is visible.  That structure was built as part of the first local hospital by Dr. Foster Hull.  Longtime residents remember later main floor occupants like Sunset Drug, and Freeman Furniture.

The bottom right of the photo begins at Lincoln Avenue, and going up, Duquesne, LaFayette, Irving Place, to Van Buren Place which was the western boundary of Thomas Ince’s second movie in Culver City.  That studio, where classics like Gone With the Wind was filmed, is known as The Culver Studios today.  If you look to the right, Culver Grammar School sits behind a flagpole. That school was rebuilt and named in honor of its principal, Linwood E. Howe. 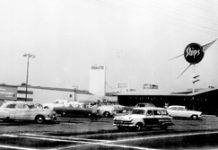 Looking Back: Culver Center was a mecca of activities, retail outlets after WWII