A Culver City engineer who sold military intelligence information to who he thought was a Russian spy has been sentenced to five years in federal prison on Sept.18.

Gregory Allen Justice, 50, was arrested by federal agents last year for stealing state secrets and selling them to an undercover FBI agent posing a Russian spy.

Justice plead guilty in May to one  count each of  attempting to commit economic espionage and attempting to send restricted information out of the United States in violation the Arms Export Control Act and the International Traffic in Arms Regulations.

United States District Court Judge George Wu said it was “extremely troubling” that Justice was willing to sell the secrets to the Russians because it is well known that their government   “is not friendly to this country.”

In addition to the espionage charges, prosecutors accused Justice, an engineer and defense contractor with Boeing who worked on sensitive military and commercial satellite programs, of attempting to kill his wife by poisoning her.

Wu rejected the government’s request for a longer prison sentence based on the alleged attempted murder of his wife because according to the judge the prosecution did not provide compelling evidence to sustain an attempted murder charge.

During his allocution in court, Justice admitted that he stole proprietary trade secrets from his employer and passed them to the undercover agent.

Justice’s sentencing comes during a time when special counsel Robert Mueller appears to be stepping up his investigation of potential collusion between members of President Donald Trump’s campaign team, members of his White House staff,  possibly of Trump himself and Russian intelligence officials.

In addition, committees in the House of Representatives and Senate are pursuing its own separate investigations.

In exchange for providing the trade secrets during a series of meetings over six months in 2016, Justice received $3,500 in cash. During their final meeting, Justice offered to take the undercover agent on a tour of his employer’s production facility.

According to court records, Justice “understood that the information he provided would be sent ‘back to Moscow and they will review this.’”

“This defendant sold out his employer and betrayed his country in exchange for a few thousand dollars,” said Acting United States Attorney Sandra R. Brown. “His actions posed an imminent threat to our national security.

“By virtue of the excellent work of the FBI, there was no damage to our security interests, and a person who was willing to sell important information to a foreign power will now serve a considerable amount of time in a federal prison.”

In court documents filed in relation to sentencing, prosecutors said Justice sent most of the money he received from the undercover operative —and possibly thousands of dollars more —to an “online paramour” that he had never met.

The case against Justice was investigated by the FBI and the Air Force Office of Special Investigations.

Prosecutors from the Terrorism and Export Crimes Section of the United States Attorney’s Office and the National Security Division’s Counterintelligence and Export Control Section prosecuted the case. 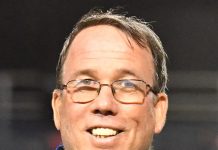 Candidate statements for council candidates to be released Saturday

DIAVOLO’s ‘This Is Me: Letters from the Front Lines’ artistically shares...