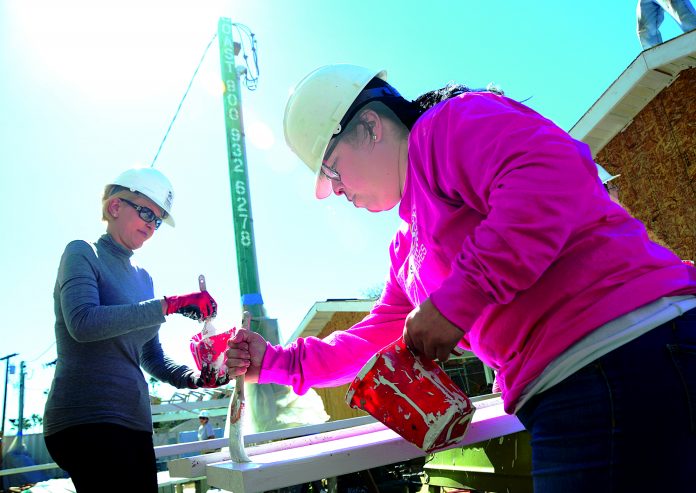 There’s a popular proverb that goes, “home is where the heart is.” And the Culver City Rotarians know that the home about family and a strong foundation.

So, on a warm Saturday in February, it was not unusual to see about a dozen local Rotarians donning hard hats, scaling rooftops, and armed with paintbrushes, nail guns, hammers, and saws.

The Culver City Rotary Club, along with its volunteers, and a strong presence from the Latinos Unidos Rotary Club were among those who took part in Feb. 23 “build day” with the Habitat for Humanity in Culver City.

“I’ve always wanted to do construction, but didn’t go down that path,” CC Rotarian Rod Miyata said. “Today gave me a slight taste of doing construction. I had a LOT of fun with that nail gun. I put up some siding. It was of course…a blast.”

Along Globe Avenue, between Washington Place and Washington Boulevard, 10 homes are in construction — which “is the largest project ever undertaken by Habitat for Humanity,” CC Rotarian Carmela Raack said.

Eight of the homes are in various stages of development, with one or two close to completion. The last four houses, which will be two duplexes, have yet to break ground.

“The city of Culver City has been advocates for this project for more than 10 years,” Raack said. “The city has closely worked with Habitat for Humanity, including vetting the future homeowners.”

A condition to taking home ownership, the new owners must work or live in Culver City, sources said. They also take finance and home management classes, work on the homes for 500 hours, and receive assistance in getting a home loan.

Raack said that Rotary has been involved in the project for almost two years, with another year or so to go.

“Five Rotary Clubs have joined together to pledge $75,000, which is the cost of half a house,” she added.

The Rotary Clubs in addition to Culver City are Playa Venice Sunrise, Palos Verdes Sunset, Santa Monica and Westchester.  The clubs worked together last July, and since then each clubs has scheduled a “build day.”

Culver City Rotary plans another build day on Oct. 5. Culver City residents are invited to participate. Only 40 volunteers will be working on Oct. 5, so those interested should add their name to a list by writing to culvercityrotary@gmail.com

The Culver City Rotary Community Foundation through their Community Grants Program, We Care, has donated $10,000 toward the homes in Culver City.

The full pledge is almost met, Raack said. Any company, organization or individual interested in supporting this build, can make a monetary donation.

“Donations large or small are appreciated.  Wells-Fargo Bank is a sponsor for $15,000,” Raack said.

Contact the Culver City Rotary at culvercityrotary@gmail.com for more information. Or call Carmela Raack at 310-641-0142; email her at carmraack@aol.com.