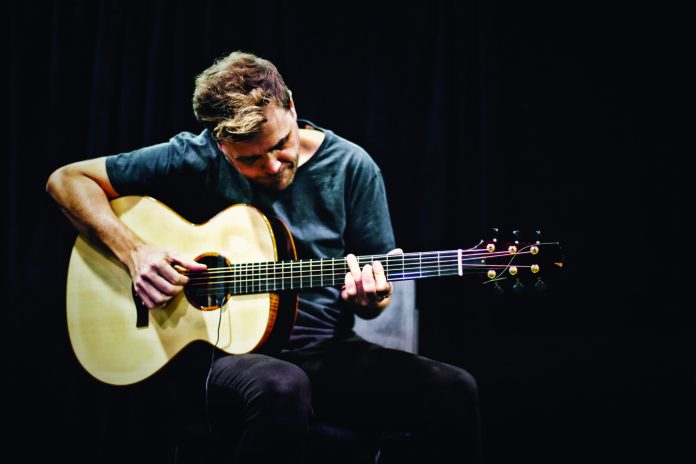 The Culver City News recently visited with Adam Miller about his Saturday, Feb. 23 show at Boulevard Music, 4316 Sepulveda Blvd.
Culver City. His show runs from 8 to 10 p.m. Cost is $15.

“I started playing guitar when I was 9 years old and was writing instantly,” Miller said. I started doing little performances not long after. It was in late high school that performing, writing, and recording began to dominate my life.

His influences in music have since been guitarists

“Most of my favorite music is instrumental, I guess a consequence of starting to play so young and not being able to sing along very well with the music of the time! I’m honestly most often inspired by the guitar, some of my biggest inspirations being Bill Frisell, Charlie Hunter, Julian Lage, Tommy Emmanuel, and John Mayer.”
Miller describes his style as instrumental and melodic.

“I perform instrumental music that is fun and melodic with strong hints of jazz and blues,” he said. “Everything has a strong groove and I have developed a technique that allows me to play bass lines, melody, chords & solos all at the same time. My compositions are inspired by family, life and working life out!”
A native of Australia, Miller said he recently relocate to the states.

“I’ve actually just moved to Los Angeles in January 2019. But I’ve been in Newcastle, Australia for most of my life. It is a beautiful coastal city that has fostered much talent that has gone onto global success. Everyone there is so talented and to be noticed you’ve got to work extra hard on your craft. I’ve got a feeling LA is the same.
As a seasoned musician, Miller has a few memorable moments.

“Over the years, I’ve been fortunate enough to play with so many of my heroes,” Miller said. “A huge crazy highlight was walking off the street and talking my way into playing two shows with Les Paul on Broadway on my first ever trip to New York City in 2007.”

Playing before a live audience is something he treasures.

“Honestly, any show where people turn up is the best gig,” Miller said. “Having toured the world for the past 9 years, and living geographically so far away in Australia, it always blows me away to have an audience and I never take it for granted that people would come to share a night of music with me.”
Along the way, he has turned out some pretty good music.

“My last album ‘The Defining Of Success’ is available now on all digital platforms or on CD and Vinyl on my website,” Miller said. “I’m releasing a special three-track EP of solo acoustic performances of some of these songs on Feb. 22 to coincide with this show.”
No stranger to Culver City, Miller will make a return visit on Saturday.

“This will be my third performance at Boulevard Music” he said. “Gary (Mandell) and the team there have such an inviting venue and create a beautiful environment to share music in.”
For the Boulevard Music show, Miller will play some of his favorite tunes.
“I will be performing solo at the upcoming show,” he said. “I’ll be performing songs from my last record, some of my favourite songs ever, and possibly brand new songs as I’ve been very inspired in the past few weeks. The thing I love about performing solo is that I’m really able to go on a journey with the audience that night. I never write a setlist, instead of allowing the vibe of the room to guide me. Songs often end up more improvised and become unique arrangements for one night only.
Miller will spend the rest of 2019 touring and taking some time in the studio

“I will be doing more shows throughout L.A. and the USA,  whilst working on a new album.”