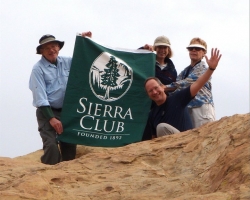 “Everybody needs beauty as well as bread, places to play in and pray in, where nature may heal and give strength to body and soul alike.” – John Muir

Samuel Adams, a founding father of our country, stated “It does not require a majority to prevail, but rather an irate, tireless minority keen to set brushfires in people’s minds.”

While Mother Nature might be a little leery of the brushfire reference, there’s no disputing that she has a passionate and diligent advocate in the Sierra Club, America’s oldest, largest and arguably most influential grassroots environmental organization, founded in 1892 by John Muir, and now numbering 1.4 million members.

The Sierra Club works to protect the planet by engaging in political activity, leading trips into nature, and organizing citizen action in local community campaigns. Its many priorities for 2011 include fighting global warming, safeguarding the water supply, protecting the coasts from climate change, greening the transportation system, and improving recycling by holding manufacturers responsible.

The West Los Angeles Group, established in 1953 and serving communities including Beverly Hills, Culver City, Malibu, Pacific Palisades, Santa Monica, Topanga and West Los Angeles, is the largest of 16 regional groups within the Angeles Chapter of the Sierra Club.

The Chapter, celebrating its centennial year, is engaged in more than 30 campaigns to make Los Angeles and Orange Counties more livable. Volunteer activists promote livability in their communities by organizing around everything from land preservation and public transportation to air quality and sustainable consumption.

David Haake, a professor of medicine at UCLA, is chair of the West Los Angeles Group. His interest in the Sierra Club began as he said, “When I fell in love with the mountains on the many backpacking trips with my parents when I was growing up.”

“My first Sierra Club experience,” Haake said, “was a service trip maintaining trails in the eastern Sierra when I was in high school. I spent the next 30-plus years very focused on my education and career until 2006. I was looking for ways to reconnect with nature, and discovered that the West Los Angeles Group meets in Culver City. I became its program director in 2006 and was elected as chair in 2010.”

Haake said he wants to increase awareness of the Sierra Club’s mission to “explore, enjoy and protect the planet.”And the challenges abound.

“We are witnessing a struggle of historic proportions to move Los Angeles beyond coal,” according to Haake. “Currently, Los Angeles gets 39% of its electricity from two coal-fired power plants – in Arizona and Utah. These plants are two of the worst stationary sources of pollution in the country, discharging huge amounts of hazardous pollutants, which cause a variety of dangerous health problems including fetal development problems, asthma, strokes, heart attacks and unnecessarily early deaths.”

Haake highlighted the ongoing Los Angeles Beyond Coal campaign, describing a meeting that he and other advocates had with Los Angeles City Councilmember Paul Koretz on Dec. 9, in which Koretz endorsed the Sierra Club’s campaign (which is also a stated goal of  Mayor Antonio Villaraigosa) to get Los Angeles off of coal-fired power by 2020.

Kent Minault, whose primary affiliation is with the anti-coal campaign, posted a detailed summary of the meeting on the West Los Angeles Group’s Facebook page. Noting the “fruitful discussion” with Koretz, Minault described his pride in having brought “such a diverse and articulate group to the table,” adding that one of his personal goals was to show that “the impetus behind the green energy movement was not confined to a few environmental groups and their enthusiasts, but was embraced by the city and the whole society at large. By bringing in a range of ages, races, professions and faiths, we were able to show the wishes of a lot of people who stand behind us.”

Minault said he believes that the meeting helped the organization articulate a coherent picture of a green energy future for the city, and to create lines of communication to bring that picture to the attention of council representatives and, ultimately, to the attention of the DWP.

Plans for this year, he explained, include working with legislative experts in creating proposed legislation to bring to Koretz in front of the Los Angeles City Council.

Haake said he feels that the biggest challenge facing the West Los Angeles Group involves getting the word out about their many outings and conservation activities. “The Sierra Club is a wonderful community of outdoors enthusiasts and environmental activists that organize hundreds of wonderful hikes in the local mountains every month and are working hard to protect wild places. For example, the West Los Angeles Group leads a great hike in Pacific Palisades every Friday evening that is attended by 30 to 40 people. It’s an excellent workout and a great way to end a busy week.”

Explaining that his top priority upon becoming chair was to do a better job of publicizing their activities, Haake said he believes substantial strides have been made by using social media.  He said he also finds that old-fashioned outreach events work really well, and that a number of these are scheduled this year, including a newcomer/member informational meeting in the community room of Marina del Rey’s Burton Chace Park, March 30 at 7:30 p.m. Many of the Sierra Club’s activity sections will be represented, including Wilderness Travel, 20s & 30s, Singles, Hundred Peaks, Natural Science and Conservation Task Forces.”

The West Los Angeles Group regularly meets at 7 p.m. on the second Wednesday of odd-numbered months in the Uruapan Room of the Veterans Memorial Building, 4117 Overland Ave., Culver City. The group presents free educational events, refreshments are served, free parking is available and all meetings are open to the public. The May 11 meeting will address sustainable and responsible investing.