There are a few ghost stories that are dramatically unearthed at this time of year in the “Heart of Screenland.”  The first involves noted filmmaker Thomas Ince, who established two of the three major Studios in Culver City, both of which remain working studios, (Sony Pictures and The Culver Studios).

Ince’s first studio in the Heart of Screenland was the result of Harry Culver’s effort to entice him from his “Inceville” location along the beach, (near Sunset Boulevard ) to Culver City. This occurred after seeing Ince film one of his famous Westerns on Ballona Creek.

Harry Culver was enamored with the movie industry, and in fact, married Lillian Roberts, an actress under contract to Mr. Ince. Culver, the entrepreneur, saw the industry commercially as a substantial part of the city’s economic base—which continues to be the case.

In 1918 Ince, a talented actor and filmmaker built his landmark administration building at his second studio here, where he located his office. The young Ince met his death after a birthday party in his honor aboard William Randolph Hearst’s yacht in November 1924. He was brought home to LA where he died.

Only Mrs. Ince and his doctor saw him in his final hours, after which the body was cremated. Amid rumors of his tragic death, Ince’s widow, Elinor, ran Thomas H. Ince Studios temporarily.

The Culver Studios’ most notable structure remains “The Mansion,” Ince’s administration building which faces Washington Boulevard. (No, it was not “Tara” from Gone With The Wind- that was on the back lot, called the “40 Acres” which was really only 29.).

Ince’s second floor office still exists, as does an adjacent conference room, known as “the boat room.”  Studio workers often report sightings of Ince’s ghost walking through the mansion as well as a female ghost in a long flowing dress.

Recent “ghostly sightings” will be actually explored on the Ricki Lake Show Halloween week—which is taped on that lot.

There is also another ghost sighting consistently reported in Downtown Culver City. He has been identified as Dr. Foster Hull.

Dr. Hull was the Health Officer in Culver City who built the Hull Building in the mid-1920s as the first hospital. After losing it in the Great Depression, the structure has been under the continuous ownership of the Freeman family. It was reinforced for earthquakes during the time it was a branch of the Bank of Orange County.

It has been used consistently as a restaurant since then. It is a gem in our downtown, named “Akasha.” And if you speak to the owners, or the bartenders, you might hear of a late night visitor at the bar, who bears a keen resemblance to Dr. Hull.

Drama is to be expected here, right? Enjoy. 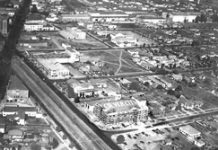