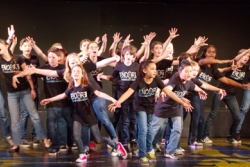 “This choir was the most musically talented group of middle school students I have ever heard, varying levels of stage experience notwithstanding,” said Musical director Dane Morris.

Individual students were featured in solos throughout the concert. A live professional band accompanied the choir and soloists, and CCHS student Eric Mitchell designed the lighting for the show.

The show choir program, one of two programs of CCMS Theatre Arts, is partially funded by a grant from the Glee Give a Note Foundation that supports music in the schools.

Encore’s spring performance is on June 1 and 2 at Robert Frost Auditorium.