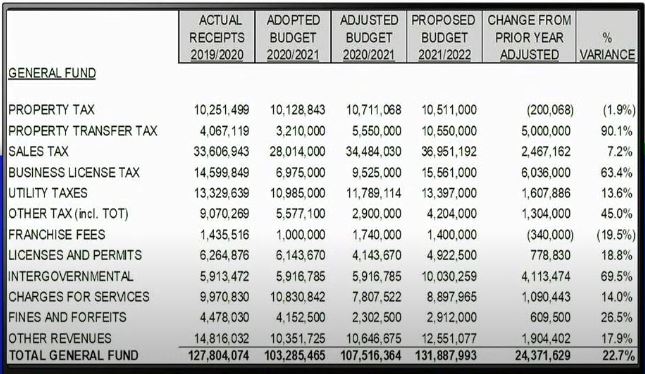 As the city began its study of the city’s budget for the upcoming fiscal year, discussion and concerns from citizens honed in on the changes in the police department.

One of the major increases in the budget is an allocation of $1.5 million for Mobile Crisis Intervention and Response Program (MCIRP), which was approved earlier this year as a first step in the reevaluation of public safety in Culver City.

The addition of this program and team comes with the reduction of the department. While “no immediate layoffs” were promised by the council when the program was approved, eight positions are to be eliminated permanently — four unfunded and four funded — and replaced by four civilian ‘management analysis’ positions.

City Manager John Nachbar recommended at this point in the presentation that further reduction in officers be tied to reduction in workload.

This comment drew ire from many speaking in public comment that night. One even went as far to say that Nachbar should be removed if he is “incapable of listening.”

Despite these cuts to officers, the department’s expenditures are projected to increase by 6% to over $44 million, which represents over 33% of general fund expenditures.

As with other meetings where the topic is discussed, policing took the center stage with the majority of commenters. Several speakers in favor of cuts to the police department noted that this fiscal budget sees an increase in police spending. One speaker noted that while there was a 6% increase in police spending, there was a 16% decrease in community development, which includes another hot topic: homeless programs.

In total, the city budget is looking at $6.195-$6.595 million in total enhancements, which staff says is comparable to amounts requested in previous years. These enhancements include the MCIRP.

With the end of the COVID-19 pandemic in sight, projections for revenue in the city are up in several important categories, for a total 22.7% increase.

The city sales tax, which generates close to a third of the total revenue, was noted by staff to be more resilient than expected during the pandemic. It still has room for growth, evident by the $2.5 million increased projection, which amounts to just over 7%. The total estimate of about $37 million exceeds the total earned in the 2018/19 fiscal year.

The Transient Occupancy Tax (TOT) was one that city staff had fears would never recover following the lockdowns and pandemic. This tax is one charged to transients staying in non permanent housing, which mainly comes from hotels and motels. The revenue from this tax is up almost 50%.

Business taxes are also a significant portion of the city’s revenue, and they have collected $13.8 million in business taxes up to April 2021. For the overall fiscal year, the tax is expected to increase by $5.3 million.

Another difference from last fiscal year is the increase to the Real Estate Transfer Tax, which came as a result of Measure RE voted on in November. This tax increase is expected to generate $5 to $6 million in expected revenue, a 90% increase from the previous year.

While the COVID-19 pandemic took a toll on many revenue streams, it also came with help in response. The city was allocated a total of $7.3 million, and $3.7 million of that, classified as intergovernmental revenues from American Rescue Plan, was allocated into the upcoming budget. The other half was used in the current 2020/21 fiscal year.