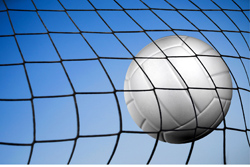 The Culver Volleyball Club 16 year olds coached by Tanner Siegal came out of the loser’s bracket and avenged a loss to an Oregon team to win the 8th annual Summer Soiree Volleyball Tournament in Anaheim, 25-19, 25-22.

Six Culver City teams ranging in ages 12-18 entered, but by the end of the week the only local team that remained was16-Tanner in the 64-team field.

Sixteen-Tanner was put in the losers bracket by Spitfire Volleyball Club from Oregon. Culver went on to win the rest of its games against undefeated teams to win the crown.

“It was a great team victory.  We had all kinds of momentum going forward,” said Siegal.

Culver and Spitfire played excellent side-out volleyball, according to Siegal, but Culver felt the momentum and took the title.

For more information about Culver Volleyball Club go to www.culvervolleyballclub.com.